The New “Hunter” UCAV Might Work in Tandem with Su-57 Fighter.

The same week the photos of the new “Hunter” drone appeared across Russian Twitter and Facebook accounts, photos of a Sukhoi Su-57 with unique camouflage plan view markings and new tail insignia also surfaced. The markings on the tail of the Su-57 (053 Blue) show the plan view shape of what appears to be the Hunter drone, along with an Su-57 next to it. The two shapes float above a lightning bolt silhouette in the background, suggesting some electronic relationship between the two aircraft.

The new pixelated camouflage on the underside of the aircraft mimics the plan view shape of the Hunter remotely piloted aircraft. 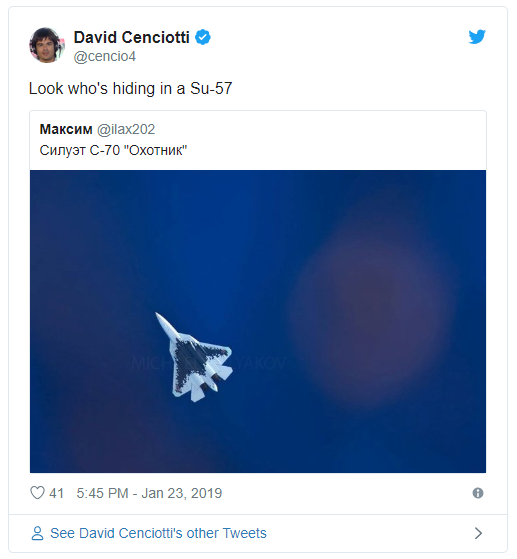 Speculation has surfaced that the Su-57 may be developing some capability to control or share data with this new remotely piloted aircraft. This concept may be similar to an idea proposed by the U.S. Air Force with the F-35A Lightning II. A future concept video released by the Air Force Research Lab on March 22, 2018, shows an animation of an F-35A flying with six unmanned aircraft. The concept is that the unmanned aircraft themselves manage their own basic flight control while the F-35A acts as a command and control hub to assign targets and select weapons for the unmanned aircraft to employ.

The idea is particularly relevant in a “first day of war” scenario when an F-35A could fly along the forward line of battle just outside the range of enemy air defenses and then vector the remotely piloted aircraft in toward heavily defended targets such as command and control networks and air defense sensors. These remotely piloted aircraft could then release stand-off weapons to destroy enemy command and control and air defense assets.......continue reading: HERE

According to the defense official, the sixth generation jet program “has not yet taken full shape, its main features are already known.”

“First of all, it should be unmanned and capable of performing any combat task in an autonomous regime. In this sense, the stealth drone will become the prototype of the sixth generation fighter jet,’ the source said, adding that the drone will be able to “take off, fulfill its objectives and return to the airfield.”

“However, it will not receive the function of decision-making regarding the use of weapons – this will be decided by a human,” he said.

TASS notes, in the report, that they were not able to officially confirm the information provided by the defense official.

Another defense expert told TASS that the single-engine Okhotnik (“Hunter” in Russian) stealth drone has a top speed of roughly 621 mph (.809 Mach), and would start flight tests in the second half of this year.

“The Russian Defense Ministry and the Sukhoi Company signed a contract for developing the 20-ton Okhotnik (Hunter) heavy unmanned strike aircraft in 2011. The drone’s mock-up model was made in 2014. According to unconfirmed reports, composite materials and anti-radar coating were used to create the Okhotnik. The drone is equipped with a reaction-jet propulsion and is supposed to develop a speed of 1000 kilometers per hour,” said TASS. Source: zerohedge.com
Posted by Nawapon at 23:34