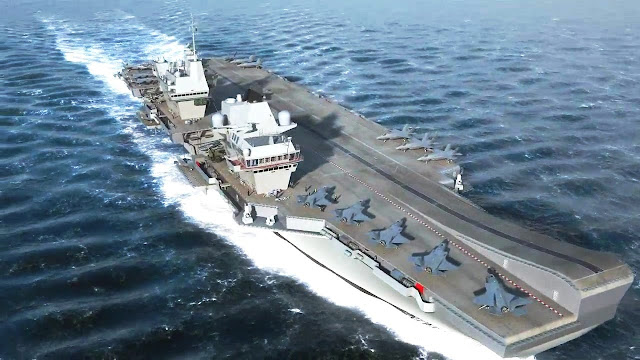 The agreements are for the Common Anti-air Modular Missile, the Meteor, and the Sea Viper, which will all be deployed on Britain's Queen Elizabeth-class carriers when they are put in service.

The agreement includes three separate missile deliveries, including the Common Anti-air Modular Missile, the Meteor, and the Sea Viper. U.K. defense officials say the contracts aim to keep developing Queen Elizabeth-class carriers safer once they are put in service.

"This substantial investment in missile systems is vital in protecting our ships and planes from the most complex global threats as our armed forces keep the U.K. safe," the U.K.'s Secretary of State for Defense Michael Fallon said in a press release. "These contracts will sustain high skilled jobs across the UK and demonstrate that strong defense and a strong economy go hand in hand."

Britain has set aside $52 million for the Meteor missiles, $223 million for anti-air Sea Viper systems and $413 million for Common Anti-air Modular Missiles, or CAMM. The latter will be integrated with Type 26 frigates for enhanced air defense.

The Principal Anti Air Missile System (PAAMS) is a joint programme developed by France, Italy and the United Kingdom for an integrated anti-aircraft warfare system. The prime contractor is EUROPAAMS, a joint venture between Eurosam (66%) and MBDAsubsidiary UKAMS (33%). MBDA also owns 66% of Eurosam, in effect giving it a 77% share of the project. In the United Kingdom PAAMS has been given the designation Sea Viper.
The PAAMS warfare system is in service with the Royal Navy, French Navy and the Italian Navy.
PAAMS components
Both variants of the PAAMS operate in conjunction with the S1850M Long Range Early Warning Radar. Source wikiwand.com

Design of the Meteor missile system
The missile, being designed as a complete unit, requires no assembly and maintenance immediately before loading. This arrangement reduces its overall life logistic support cost.
Meteor can be launched as a stealth missile. It is equipped with enhanced kinematics features. It is capable of striking different types of targets simultaneously in almost any weather.
The Meteor has a length of 3.65m and diameter of 0.178m. It is designed to be compatible with AIM-120 type rail and eject launcher systems.
Meteor BVRAAM blast-fragmentation warhead
The Meteor missile is equipped with a blast-fragmentation warhead, supplied by TDW of Germany. The warhead is designed as a structural component of the missile. The missile integrates proximity and impact fuses.
Sensors on the beyond visual range air-to-air missile
The Meteor is equipped with a two way datalink, which allows the launch platform to provide updates on targets or re-targeting when the missile is in flight. The datalink is capable of transmitting information such as kinematic status. It also notifies target acquisition by the seeker.
The Meteor is installed with an active radar target seeker, offering high reliability in detection, tracking and classification of targets. The missile also integrates inertial measurement system (IMS) supplied by Litef.
Meteor missile performance
The missile has a range in excess of 100km. It is designed for a speed greater than Mach 4. The missile has a large no escape zone. 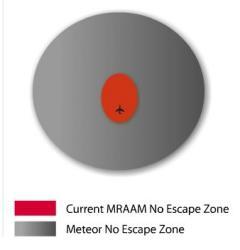 Propulsion system on the next generation missile
The Meteor missile is powered by a solid fuel variable flow ducted rocket (ramjet) supplied by Bayern-Chemie. The ramjet provides the Meteor missile with a capability to maintain consistent high speeds. This ability helps the missile to chase and destroy fast moving flexible targets. 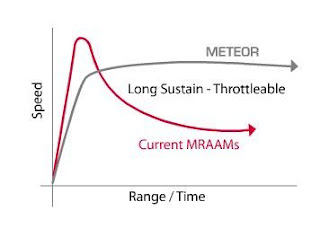 The Meteor includes an electronics and propulsion control unit (EPCU). The EPCU adjusts the rocket’s air intake and duct covers based on the cruise speed and the target’s altitude.
The EPCU observes the distance and fuel level in the rocket and adjusts the throttle of the rocket. This feature of the EPCU helps the missile to manage its fuel system. Source airforce-technology.com