The Newest Version of the Massive Tupolev Tu-160 Blackjack Was Rolled-Out This Week.

While the original version of the Tu-160 first flew in December of 1981, the program was halted with collapse of the Soviet Union. Ukraine acquired several of the aircraft that were subsequently traded back to Russia in a bombers-for-natural gas deal.

“While ostensibly an improved variant of the Soviet-era Tu-160, the Tu-160M2 is a new bomber in all but name” according statements published in Russian media from the Russian Aerospace Force.

By appearance and Russian claims, the Tu-160 appears to be an impressive aircraft, with the completely updated “M2” version purported to be even more capable. The Tu-160 in its previous variants held a number of records for speed in its weight class. It remains the largest, fastest strategic bomber in operation, second only to the developmental U.S. built XB-70 Valkyrie in size, weight and performance. It is also the world’s largest variable-geometry swept wing aircraft, significantly larger and heavier than the U.S. B-1B strategic, supersonic variable-swept wing bomber.

This latest version of the titanic “Blackjack”, as it is known in the west, is expected to make its first flight in late 2018 and enter into full-rate production by 2021 according to Russian media.

“The first Tu-160M2 is expected to make its first flight by the end of 2018, followed by full-scale production in 2021,” Col. Gen. Viktor Bondarev, commander of the Russian Air Force, told media in the rollout ceremony at the S.P. Grobunov assembly facility in Kazan, in southwest Russia on Thursday, Nov. 16, 2017.

The newly built Blackjack will initially be capable of performing the same missions as the existing Blackjack fleet and will subsequently be modified and upgraded to the M2 standard.

Analysts note that the full-scale production date has been rolled back from 2019 to the new 2021 date announced today.

The Tu-160M2 is intended to be the basis of Russia’s strategic strike capability, but funding for the project has faced challenges.

All reports suggest the only similarities between the new “M2” version of the Tu-160 are the name and the airframe. All avionics, sensors and communications equipment are reported to be new. The aircraft is also intended to be re-engined with four new, upgraded Kuznetsov NK-32 engines with afterburners.

Interestingly, the rollout of the new Tu-160M2 seems to have quieted discussion of the conceptual Tupolev PAK-DA flying wing stealth bomber, a project shown in drawings since 2008. Early reports suggested the PAK-DA would be entering service in 2025-2030. A statement today during the Tu-160M2 rollout downplayed low-observable technology, saying that the Mach 2+ speed of the Tu-160M2 and the use of stand-off weapons negated the need for stealth. Key new weapons on the Tu-160M2 are the KH-101 and KH-102 long range, low-observable cruise missiles. These large, capable, precision missile systems have ranges in excess of 1,000 miles.

The Tu-160M2 will operate alongside the aging Russian Tu-95 Bear turboprop long range maritime patrol and strategic bomber in the foreseeable future, mimicking the U.S. reliance on their B-52 Stratofortress legacy heavy bomber alongside the B-1B (conventional) supersonic strategic bomber.

BELOW: First images of the 1st (Soviet legacy airframe №08-04) Tu-160M2 strategic bomber during the rollout ceremony & transfer to the flight testing facility at the S.P. Grobunov Plant in Kazan on 16.11.2017. ©Iskander Asabaev. Source: RussianDefence.com 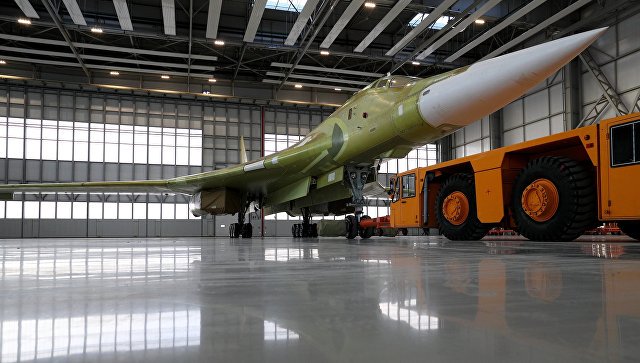 BELOW: More images of the Soviet legacy airframe №08-04 Tu-160M2 strategic bomber  during the rollout ceremony & transfer to the  flight testing  facility at the S.P. Grobunov Plant in Kazan on 16.11.2017. Images via  bolshayaigra_war. Source: RussianDefence.com 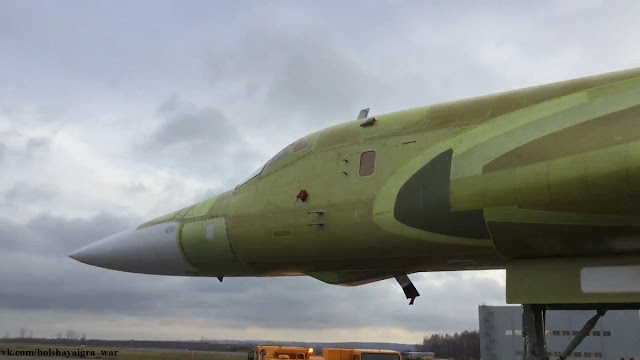 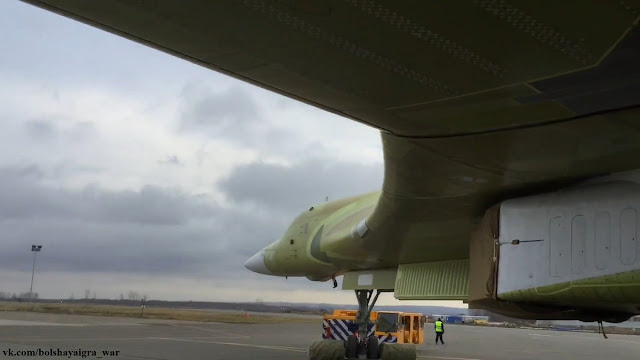 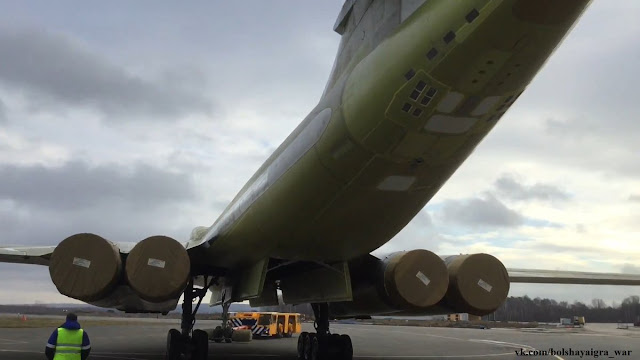