Killer Facts: The scale of the global arms trade 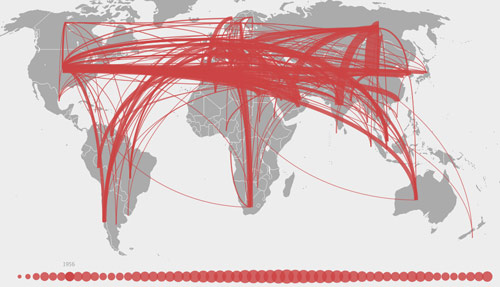 Between 1992 and 2015, the United States reported transfers of heavy conventional weapons to the UN Register of Conventional Arms totalling: 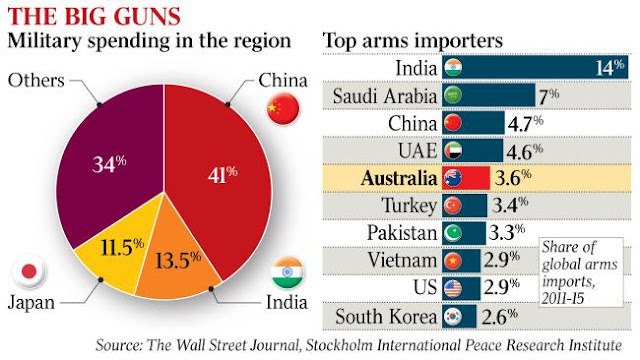 ROBERT WALL, DOUG CAMERON
The Wall Street Journal
12:00AM February 23, 2016
The rapid rise in China’s military spending and a greater assert­iveness in its territorial claims is fuelling an arms race in the Asia-Pacific even though many countries involved have been hit by an economic slowdown, research reports suggest.
Of the 10 biggest importers of defence equipment in the past five years, six countries were in the Asia-Pacific, the Stockholm International Peace Research Insti­tute says in an annual report on arms transfers.
India was the largest buyer of foreign equipment, with China in third position after Saudi Arabia.
Although a country’s spending power is often tied to its economic strength, buyers in the Asia-­Pacific have not slashed military budgets despite their economies coming under strain from falling commodity prices and lower growth in China.
“The slight moderation in eco­nomic activity had little effect on regional military spending in 2015,” the International Institute for Strategic Studies says in a new report.
Last year, China, Japan, South Korea and Indonesia announced plans for higher military spending, the IISS report says.
Lower economic output has driven up Asian military spending as a percentage of GDP to 1.48 per cent, the London-based research organisation says, its highest level since at least 2010.
China leads the way, accounting for 41 per cent of the region’s military spending, well ahead of India at 13.5 per cent and Japan with 11.5 per cent.
Western arms manufacturers last week flocked to the Singapore air show to promote their wares to the region’s government buyers.
Swedish defence equipment- maker Saab AB used the event to unveil two maritime surveillance aircraft based on a Bombardier business jet and a turboprop plane, amid growing demand for monitoring of sea lanes in the ­region.
The Asia-Pacific was an area “where we see significant ­interest at the moment”, said Joakim ­Mevius, who heads Saab’s airborne spyplane business. A first buyer could be on contract in the next two years, he said.
IHS Jane’s forecasts annual military spending in the Asia-­Pacific will reach $US533 billion by 2020 from $US435bn last year.
A big driver of regional concern has been China’s moves to build islands in the South China Sea to boost territorial claims. It has also deployed anti-aircraft missiles on a disputed island in the South China Sea. The missiles were detected on Woody Island, part of the Paracels, claimed also by Vietnam and Taiwan.
“For several of the countries, like Vietnam and The Philippines, that obviously shows that China means it when it says ‘this is ours’,” said Siemon Wezeman, a senior researcher at SIPRI.
There is no sign China’s military spending splurge is about to end. The country’s defence budget was expected to reach $US225bn in 2020 from $US191bn in 2015, having risen 43 per cent in real terms since 2010, said IHS Jane’s analyst Craig Caffrey.
Original post: The Wall Street Journal 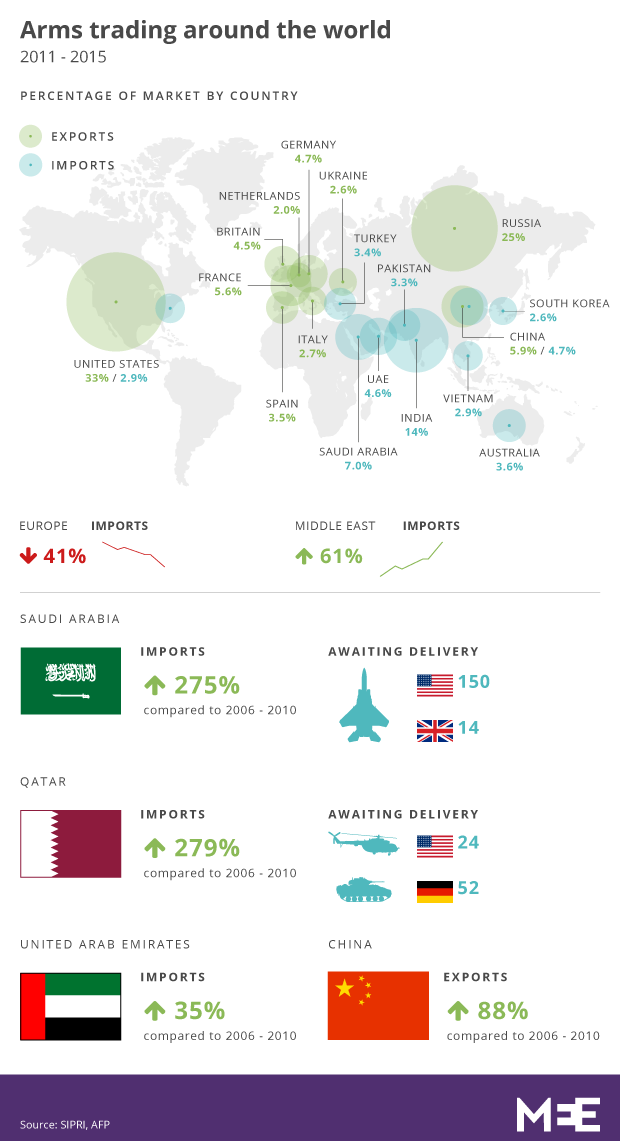 Original post: The Militarization of the Middle East in Numbers