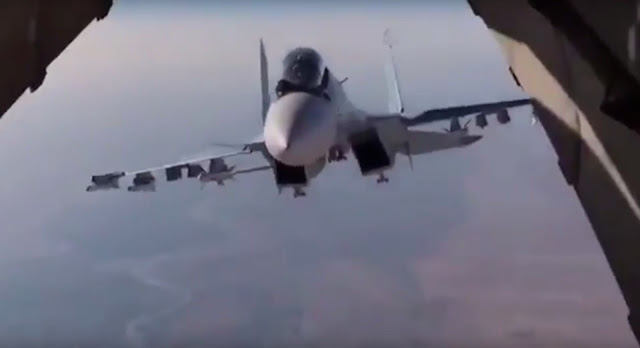 An armed Russian Su-30SM gets much close to a UN Il-76 over Deir Ez Zor, Syria.

The video in this post was reportedly filmed during a mission over Deir Ez Zor, Syria.

It shows an armed Russian Air Force Su-30SM jet, escorting an Il-76 involved in an air-drop from high altitude, getting much close to the cargo bay of the airlifter after the pallets are dropped.

We don’t know when the footage was shot. However, it must have been filmed during one of the +250 UN agency World Food Program’s airdrops of humanitarian aid to Syrians: indeed, starting from Feb. 24, 2016 to September 2017, WFP has conducted air-drops in the Deir Ez Zor area, using an Il-76, to deliver vital food and humanitarian suppliesto trapped families in the besieged city in northeastern Syria. 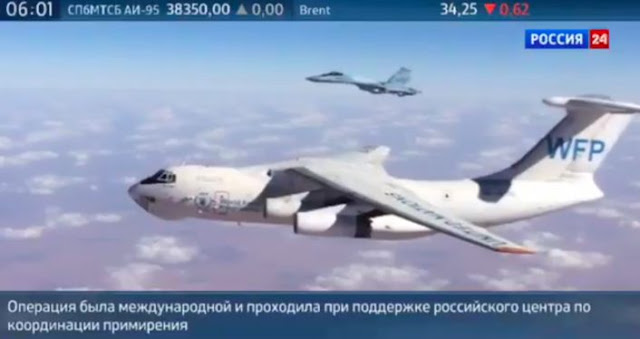 A screenshot from the Russian TV showing the Il-76 escorted by a Russian Su-35 during the first air-drop in 2016.

Flying from Amman, Jordan, a white-colored Il-76 with UN markings (RA-76780) flew to the airdrop area escorted by Russian Air Force aircraft deployed to Hmeymim airbase, including the Su-35S, and the Su-30SM shown in the video.

The UN aircraft could be tracked online using ADS-B on Flightradar24.com during these missions. 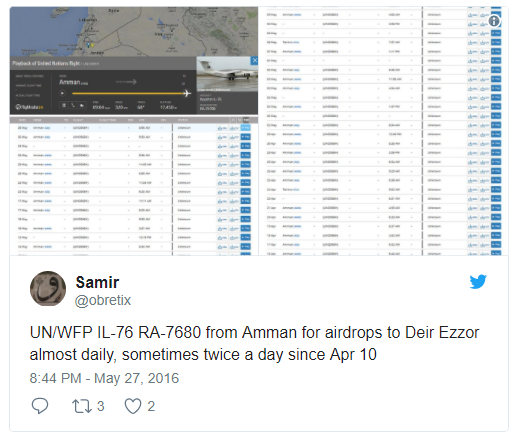 The Su-30SM is a multirole derivative of the Su-27 Flanker. It’s a special variant of the thrust-vectoring Su-30MKI and MKM produced by the Irkut Corporation for the Russian Air Force. It’s a 4+ Generation twin-engine, two seat supermaneuverable multi-role aircraft equipped with improved avionics, the Bars-R radar and a wide-angle HUD (Head Up Display).

H/T Vladimir Konovalov and Trevor Siders for the heads-up