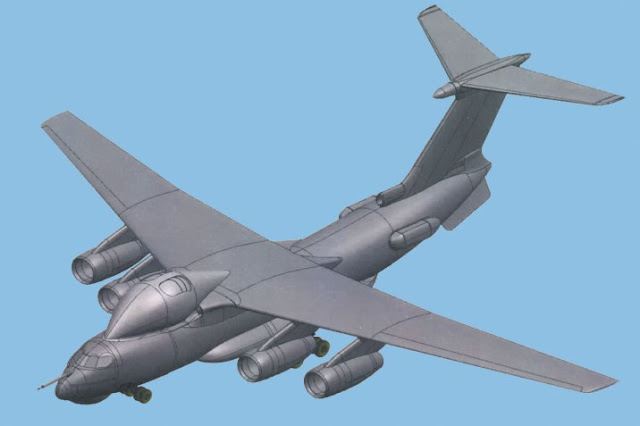 A concept for an airborne laser aircraft that Beriev submitted for a patent in February. (Beriev)

Russia’s Beriev has registered an industrial design patent for a “carrier aircraft for airborne laser system”.

The document filed in February and viewed by Jane’s presents only illustrations of the patented aircraft and does not contain additional information. However the new aircraft is a conversion of an Il-76MD-90A heavy transport and the mirror system, by which the laser is directed on to the target, is placed inside a large drop-shaped fairing on front of the fuselage behind the crew cockpit.

NPO Almaz, a developer of Russian anti-aircraft and anti-missile systems, has been working on an airborne combat laser for more than 40 years, changing both the configuration and the purpose of the system several times. As part of these projects, the Beriev aircraft design bureau in Taganrog has been responsible for designing and building the A-60 laser-gun carrier itself, hosted on an Ilyushin Il-76 transport aircraft.

In 1981 the A-60 (izdeliye 1A) was built as a balloon interceptor within the Dreyf (drift), later renamed Ladoga program, with a carbon-dioxide laser gun housed in the cargo hold. On 27 April 1984 the A-60, while flying at an altitude of 10,000 m (32,808 ft), damaged a balloon over the Volsk aerostat research centre, 700 km southeast of Moscow. In 1988 the test aircraft was burnt in an accidental fire at the Chkalovsky test airfield near Moscow. In 1991 the second experimental aircraft, A-60/2 (izdeliye 1A2), was flown; after two years, however, the trials were suspended because of a lack of funding.