Has Airbus fixed midair refueling problems with the F-15 jet?


Has Airbus fixed midair refueling problems with the F-15 jet?:

Airbus has developed changes to the software that controls the A330 tanker boom specifically for midair refueling of the Boeing F-15 Eagle. 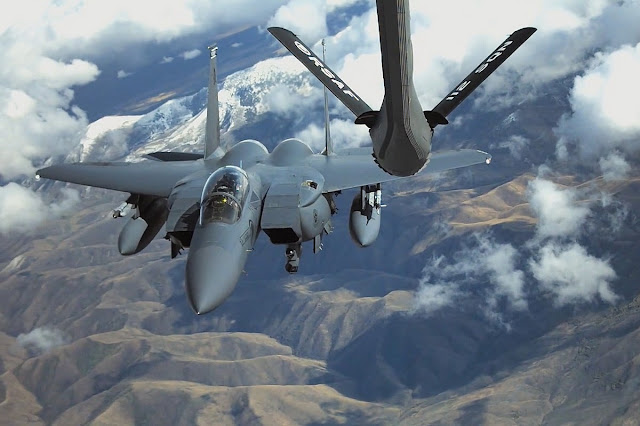 A Republic of Singapore Air Force F-15SG refuels from an A330 MRTT aircraft over the U.S. state ofIdaho during an exercise in September 2019. (Singapore's Defence Ministry)


MELBOURNE, Australia — Airbus has developed changes to the software that controls the A330 tanker boom specifically for midair refueling of the Boeing F-15 Eagle. The modification, known as boom flight control law, was coded in response to difficulties encountered during flight trials, and the update adds another receiver type to the list of aircraft certified for refueling from the tanker.

Airbus told Defense News that the need for a new boom control law came to light during flight trials between an A330 Multi-Role Tanker Transport and U.S. Air Force F-15 fighter jets. Observers noticed midair refueling between the two aircraft was more difficult than other receivers due to the F-15 receptacle’s asymmetric design and “the associated aerodynamics effects" near the receptacle.

The new boom control law on the A330 MRTT provides the boom operator with an improved and smoother way to perform the contact, an Airbus Defence and Space spokesman told Defense News.

He added that the software modification for the A330 MRTT’s aerial refueling boom system, or ARBS, called Update III Loop 6.1, was certified in 2018 following flight tests between the MRTT and an unidentified operator’s F-15s during the development and certification phases to assess and validate the behavior of the new boom control laws.

This refueling method allows higher fuel transfer rates compared to the alternative probe and drogue approach, and the former method is usually used by the U.S. Air Force and larger receiver aircraft with higher onboard fuel capacity. Like many modern tanker aircraft, the MRTT is capable of supporting both refueling methods.

Why the F-15?
The Airbus spokesman did not go into detail about midair refueling difficulties with the F-15. However, an unclassified Republic of Singapore Air Force document seen by Defense News noted that during flight tests with its F-15SG aircraft, the receivers experienced “a left roll tendency was observed in the center and right side of the boom envelope” and that when the boom was disconnected between tanker and receiver, the fighter jet “may yaw left (up to approximately 2 [degrees]) into the boom as the boom was flying up and away from the receptacle”.

The standards-related document also said aircrew “qualitatively assessed that the workload was minimal to moderate and was manageable,” adding that the F-15’s tendency to roll while on the MRTT’s boom meant that it required “a slight constant right aileron and/or rudder inputs to maintain in position.”

This left roll/yaw phenomenon corresponds with what Defense News previously reported: During refueling trials conducted by an Australian MRTT in 2015 with U.S. Air Force receiver aircraft, the boom at certain flight parameters tended to move too close to and run the risk of contact with the F-15’s canopy.

Singapore’s F-15SGs have received category 3 clearance for refueling from the MRTT, though some restrictions still apply, including that the MRTT ARBS version “must be or later than Upgrade III Loop 6.1” and the F-15SG “shall not carry stores” on the two forward left weapons stations, known as LC3 and LC6.

In addition, MRTT air-to-air refueling operations must only be carried out with the ARBS in F-15 flight control law mode. The MRTT ARBS has two other control laws: “light and “heavy” depending on the weight of the receiver aircraft. These boom control laws are used by modern fly-by-wire refueling booms to improve handling characteristics during the different phases of air-to-air refueling.

Category 3 clearance is the highest of three levels between tanker and receiver aircraft, and it is considered a low-risk clearance due to comprehensive compatibility testing between both aircraft, which includes flight testing across a range of performance parameters.

What other countries are affected?

The Singaporean document was uploaded to the website of NATO’s Joint Air Power Competence Centre, alongside that of several other coalition and friendly countries such the United States, the United Kingdom, Australia, France and Japan. Such documents are used to facilitate multinational interoperability between tanker and receiver aircraft.

Singapore is awaiting receipt of six A330 MRTTs. Its military operates a fleet of F-15SG multirole fighters used by two Singapore-based squadrons, and the fighter jets participate in U.S.-based training. Saudi Arabia and South Korea also operate the A330 MRTT and the F-15.

Airbus describes the Loop 6.1 update as the baseline for all new production aircraft, and it’s likely South Korea and France, which received their first A330 MRTT aircraft after Singapore, will operate tankers with the boom control update.

Airbus also says the update is available for MRTT operators upon request, and a spokesperson from Australia’s Defence Department told Defense News that all of its MRTTs, which are locally known as the KC-30A, “have upgraded boom flight control laws (version Loop 5.2 to 6.1), which better accommodate refueling with the F-15 Eagle.”

Australia was the first country to operate the MRTT and has carried out extensive refueling trials with other coalition receiver aircraft. In addition to F-35A Joint Strike Fighters, F/A-18 Hornets and Super Hornets, Australia’s MRTTs have also been certified to refuel coalition aircraft such as the U.S. Air Force’s B-1 bomber and the A-10 close-air support plane, the French Rafale fighter jet, and the Indian Sukhoi Su-30 Flanker, among others.

Australia also wants to add the F-15 to that list. An Australian test pilot told reporters at the Avalon Airshow in Australia this year that there are plans to conduct trials with Singapore’s F-15SGs as well as Japanese F-15J and F-2 fighters.