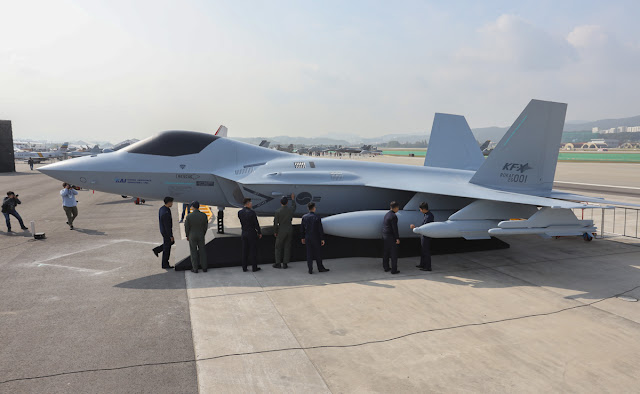 The full-scale mockup of the KF-X was unveiled at ADEX, seen here with RoKAF crew for size comparison. (Photo: Chen Chuanren)

Following the completion of the critical design review in late September, Korea Aerospace Industries (KAI) has lifted the curtains on a full-scale mockup and cockpit of the KF-X fighter at ADEX 2019 in Seoul, along with more technical details.

In February 2019 the KF-X team settled on the larger C109 design. With a maximum takeoff weight of 25.6 tonnes and a 7.7-tonne payload, the KF-X can achieve a range of 2,900 km (1,550 nm). KF-X has 10 weapons-carrying stations, and KAI will first focus its development around the Diehl IRIS-T and MBDA Meteor air-to-air missiles. It has opted for the M61 Vulcan cannon, mounted on the port side.

The cockpit layout is similar to that of the F-35, with an 8x20-inch touchscreen main display and sidestick controls. Around 65 percent of the project will be produced by local companies, including Hanwha Defence, which will produce the General Electric F414 turbofan under license, as well as landing gear, control actuators, and other components. LIGNex1 will manufacture the electronic countermeasures, head-up display, and radio systems. The KF-X will proceed with an indigenous LIGNex1 datalink, although KAI said that NATO links such as Link 16 will be considered once the program is more mature.

Hanwha has also developed—with some foreign assistance—its own infrared search and track system and a 1,088-TRM (transmit-receive module) AESA radar with 110-km range, which are two of the four primary items not approved for technology transfer by the United States. Although not involved in the KF-X radar program, LIGNex1 is in a three-year project to develop its own AESA radar, known as the Laser-A. The company says it will have more TRMs than its competitor and a 120-km range.

The KAI factory in Sacheon has already set up a KF-X line and is aiming for a prototype roll-out in the first quarter of 2021, first flight in 2022, and serial production in 2026, with all milestones currently on time, according to the company. The timeline suggests that the F-4E Phantoms and F-5E Tiger IIs will continue to fly with the Republic of Korea Air Force (RoKAF) for some years. The last remaining squadron of Phantoms is now not expected to be retired until 2022/23.

The Korean manufacturer also introduced a new export variant of the KUH-1 Surion utility helicopter. According to KAI, the primary differences are an improvement to the Garmin G5000 avionics for better flight handling and strengthening of the structure to cater for the installation of stub wings. The latter enables the Surion to be converted into a gunship, carrying weapons such as the Hellfire, Spike LR/ER, rockets, and gun pods.

KAI said that the KUH-1E is targeted at both civilian and military markets and can carry 12 passengers in VIP layout, with Bluetooth/Wi-Fi connectivity and carpeted interior. It is also in talks with the RoKAF to offer the KUH-1E for the UH-60 Black Hawk replacement.

Another marine attack version was displayed at ADEX in a bid to participate in the Korean Marines (RoKMC) requirement for 24 ship-based attack helicopters. Still based on the MUH-1 Marineon utility helicopter, it adds enlarged foldable wing stubs with six hardpoints for anti-surface and air-to-air missiles and rockets. The nose is also modified with a chin-mounted 20mm cannon and FLIR/targeting pod. KAI added that it is awaiting a request For proposal from the Korean government sometime in 2020, before building a flying prototype.