These aircraft carrier designs are being considered by South Korea


These aircraft carrier designs are being considered by South Korea:

According to local media, South Korea is considering the purchase of aircraft carriers.

Reports say that one option is a twin island 70,000 ton vessel with dimensions of 298m long and 75m wide. The vessel would carry 1340 crew and 40 fixed-wing aircraft and 8 helicopters.

It is understood that Democratic Party Party Chairman Choi Jae-sung said in a report distributed earlier this year by the National Assembly’s National Defense Commission that these two proposals were presented in the research service carried out when the Navy finalised its plan for a large carrier.

“The two proposals were reviewed, but the final decision was made with a combination of acquisition costs and acquisition periods.”

It is also understood that the aircraft carrier would likely operate the F-35. 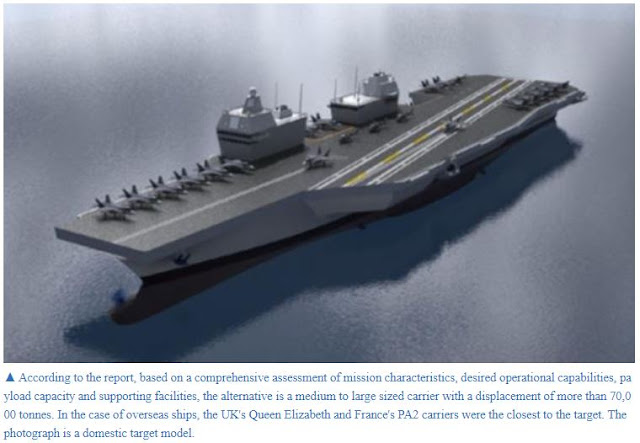 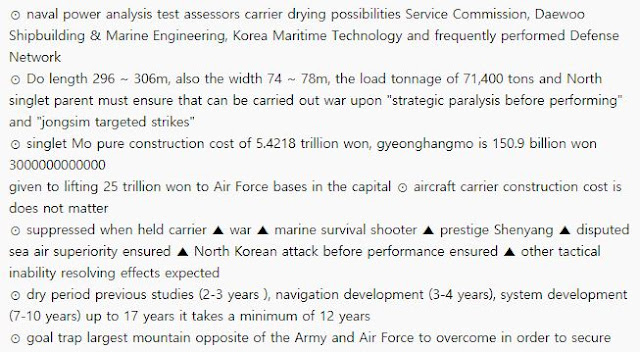 In 2015, during the Park Geun-hye administration, it was confirmed that the Navy Power Analysis and Evaluation Team conducted external services for the production of domestic and medium-sized Korean carriers to cope with North Korea's diversifying military threats and the possession of Chinese and Japanese carriers. The Navy Power Analysis and Testing Team commissioned the Daewoo Shipbuilding and Marine Consortium (Voluntary Defense Network, Korea Maritime Technology) to review the possibility of building a next-generation aircraft carrier. The service period was eight months from April to November 2015. Monthly Shipbuilding received this service report (a study on the possibility of building next-generation high-tech ship) consisting of 597 pages. A high-tech trap means a carrier.
According to the report, the core missions of the target carrier are 'Perform Strategic Paralysis', which strikes and paralyzes North Korea's major military facilities at the same time during an all-out war, and hits the center target. The target carrier must advance to the high seas of the East Sea or the West Sea, bypassing the North Korean zone of the armistice line, where a large amount of air defense power is concentrated, and perform a blow mission against power targets with major enemy forces such as Pyongyang. In order to successfully carry out 'Strategic War Paralysis', it should serve as a forward base for North Korea's WMD and strategic weapon strike missions on the North Sea or the East Sea coast. Yongbyon, where North Korea's nuclear facilities are concentrated, is only 50km away from the West Sea coastline, making it easy to access from the coast. It must carry out the function of oscillating helicopter power carrying special forces.
It also needs to carry out its interactive warfare mission against Changsha Jeongpo Gun, which poses the greatest threat to the metropolitan area. There are about 340 Changsha guns deployed in front of the metropolitan area, and the target carrier must hit about 110 targets, about one third of them. In addition, a Suppression Enemy Air Defense (SEAD) operation must be conducted against SA-5 surface-to-air missiles in the Yellow Sea area, which protects long-range guns. North Korea is forming a low, medium and high altitude air defense network with surface-to-air missiles such as 179 SA-2, 133 SA-3, and 38 SA-5.
If China intervenes in the sudden change of the Korean Peninsula, the target carrier will also carry all the fighters to support formation of a squadron to provide defense. If China takes off a fighter jet from a naval aircraft station in Shandong Peninsula, it takes about 30 minutes to pass precision-guided weapons on the west coast after passing through KADIZ. Fight fighters within a few hours. 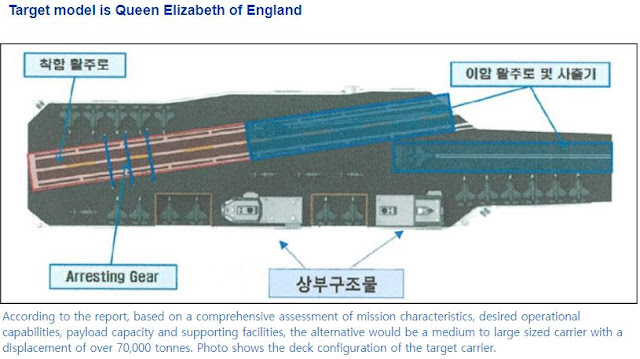 In case of territorial disputes with Japan, there are also missions that must contain more than two squadrons (two to four) of fighter planes to hinder enemy formation. The report analyzes that realistically, target missions must be equipped with more than 30 (32) fighter planes to carry out these missions.
According to the report, based on a comprehensive assessment of mission characteristics, desired operational capabilities, payload capacity and supporting facilities, the alternative would be medium to large sized carriers with a displacement of over 70,000 tonnes. In the case of overseas ships, the UK's Queen Elizabeth and France's PA2 carriers were the closest to the target.
Queen Elizabeth began building in July 2009 with a budget of 3 billion pounds to regain pride as a naval powerhouse. . The ship is equipped with 24 F-35B 'Lightning 2' stealth fighters with vertical and short takeoff and landing (VSTOL) capabilities, and has been in service since December 2017.
PA2 was the successor to Foch's successor, the French Navy's construction since 2009. Originally, the French Navy was planning to introduce Charles de Gaulle No. 2, but the French Parliament, who is well aware of the many problems that had arisen from the original ship's construction plan, rarely approved additional construction costs and continued to be raised after commissioning. Problems with Charles de Gaulle resulted in the loss of credibility even by the head of the French Navy, envisioning a new carrier for conventional propulsion. Initially, it was planned to be 55,000 tons, but was influenced by the British Navy's next port (CVF) plan, changing the design to Queen Elizabeth's next generation aircraft carrier. PA2 was canceled in 2013 under the cloud of fiscal deficit in 2013. The tonnage of PA2 to be built is 70,000 tons, and the propulsion method is integrated electric propulsion (IFEP). There are 1650 passengers (1000 crew members and 650 aviation personnel). The hull cost was about 4.37 trillion won.
The report called the two carriers targets, but as the PA2 was canceled, the model of the target carrier we would like to build can be seen as Queen Elizabeth. 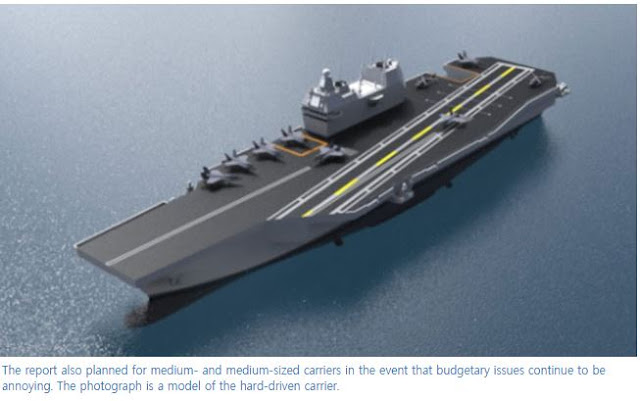 However, Kang Young-oh, former commander of naval education, made this statement in the November 2013 issue of Monthly Shipbuilding, which is why the South Korean navy should secure the warships and submarines.
“In general, the navy itself knows that carriers are a very expensive weapon system and are not suitable for the Korean navy to secure. But this is a misconception. The land-based air force base near the metropolitan area costs more than 10 million won (3.3m²), so it costs 25 trillion won to build 2.5 million pyeong (826,446,2m²). To build a new Air Force Base, land compensation costs would be 3 trillion to 5 trillion won, and airfield construction costs would be 15 trillion won. However, one de Gaulle nuclear propulsion port in France costs about 2.5 trillion won. In terms of the usefulness of the aircraft, forward air bases such as Osan, Suwon, Seoul, and Gangwon are all within the range of North Korea's 240-300mm guns and Changsa guns. In particular, as a target for North Korean special operations, the ROK Air Force cannot properly provide defense and offensive provisions at the beginning of the war. It may be argued that this is the first Korean navy to attempt to build a conventional carrier without having to consider nuclear propulsion. However, the main advantage of nuclear propulsion comes from its ability to maneuver unlimited distances at high speed without refueling. Moreover, the nuclear propulsion aircraft carrier (CVN) has a very important side benefit. The nuclear propulsion carriers do not need to carry regular fuel for propulsion, giving the carriers enough space to carry consumables, including frigates and aircraft oil. The ROK Navy is late compared to neighboring countries, but launching a nuclear propulsion port will secure the first nuclear propulsion port superior to those in Northeast Asia.
If you look at it far, the cost of drying hair is not high. Former Naval Commander Kang was a naval military strategist who was known as a pioneer in the construction of the Ocean Navy.
The report is skeptical that the Navy has a port, and the cost of one ship is more than the sum of Korea's one-year defense budget. But he stressed that the defense budget needs to be promoted through the numerical data that it is possible to build and power up the car without any big budget increase, and that the operation is also easy.
The report also planned for medium- and medium-sized carriers in the event that budgetary issues continue to be annoying. The specifications are as follows.
<Equipped aircraft: stator blades 12 group, a rotor 8 group
is goodness by: gangjeyi goodness (electromagnetic injector 2)
also the size (length × width × depth): 238 × 62 × 28 ( m)
load Tonnage: 41.5 thousand tons
main Arms / Sensors: Multi-function array radar, one set of combat system, two SAAMs (Fleet Fleet, Fleet Ground Missile, Anti-Gift Missile, etc.), three Proximity Defense Systems (CIWS)
Propulsion system: Integrated electric propulsion system
crew (aviation personnel) : 720 persons (320 persons)> In case of
medium and light carriers, the construction cost is estimated to be 3.1 trillion won (not considering the cost of onboard aircraft). Source: chosun.com