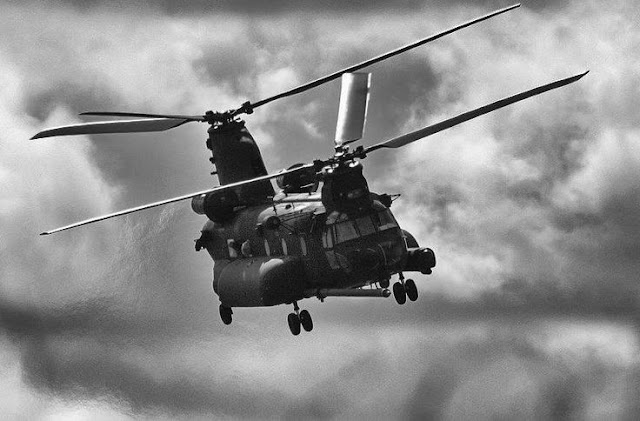 Boeing has received a $27 million contract from the U.S. Special Operations Command for preparatory work on the production of Block 2 MH-47G Chinook special opertions helicopters.

July 14 (UPI) -- Boeing has received a $27 million contract from the U.S. Special Operations Command for preparatory work on the production of Block 2 MH-47G Chinook special operations helicopters, the Department of Defense announced.

The contract calls for incorporating new and existing stockpiles of government and contractor components to upgrade CH-47 ariframes to the MH-47G variant. The airframes are being modified under the auspices of the Thechnology Applications Program Office.

Most work for the contract will take place in Philadelphia, with $27 million in Fiscal 2017 procurement funds obligated upon the award.

The MH-47G is a special operations variant of the CH-47F Chinook helicopter. The CH-47F is a twin-engine tandem rotor heavy-lift transport helicopter used by the U.S. Army, as well as many NATO and other allied nations. Its primary mission is to transport troops and large payloads at high speed and long ranges.

It is capable of external sling-load operations, placing artillery, battlefield resupply, and air asault. The CH-47 series has been in use since its introduction in 1962 and has been upgraded and refurbished many times.

The MH-47G has been upgraded with digital avionics and flight control systems, a monolithic airframe instead of assembled sheet metal for greater strength and modifications for easier transportaion by cargo aircraft. It features other changes to make it better suited for air assault operations and can be refueled in mid-air for greater range. 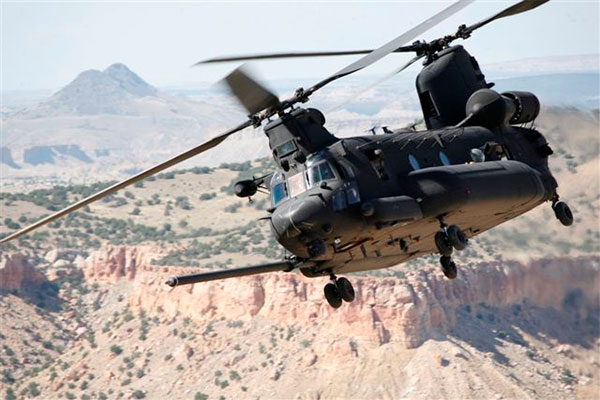 The MH-47G Chinook is an advanced heavy-lift helicopter that is manufactured by Boeing and operated by the 160th Special Operations Aviation Regiment (SOAR), or 'Night Stalkers'.

The MH-47s are typically crewed by 5 Night Stalkers:

160th SOAR Chinooks are flown in the heavy assault role. This includes the insertion, extraction of Special Operations Forces. The aircraft can also be used in the resupply role. MH-47s may also be employed in so-called 'fat cow' operations in which they are fitted with additional internal fuel bladders and deployed as a static, on the ground, refueling point for other air assets. Another role for the MH-47 is to act as an airborne C2 (command and control) platform.

MH-47 was the only US Army helicopter capable of supporting Special Operations in the higher mountainous regions of Afghanistan and as such played a major role in that theater. 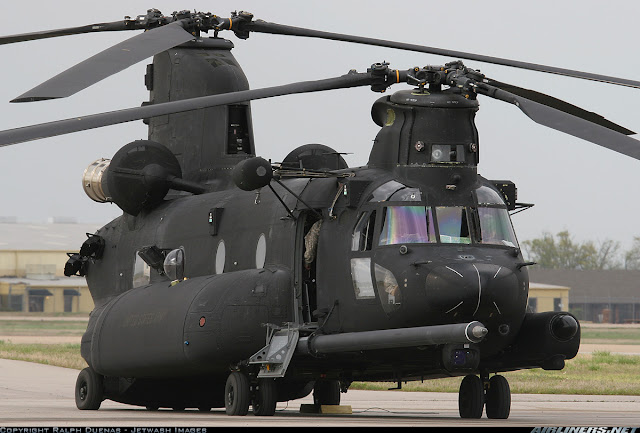 The MH-47G uses 2 T55-GA-714A engines with IES-47 Infrared Exhaust Suppressors fitted to reduce the helicopter's IR visibility. Enhanced Air Transportability Pylons allow for faster re-build of an air-transported helicopter. 'Fat tanks' are fitted in the form of enlarge fuel sponsoons that extend the MH-47G's range. An extendable refueling probe allows the aircraft to take on fuel mid-air from compatible fixed-wing tankers. The airframe a belly hatch, bubble windows along each side and a rear ramp that can be used to load and off-load troops, supplies and vehicles. 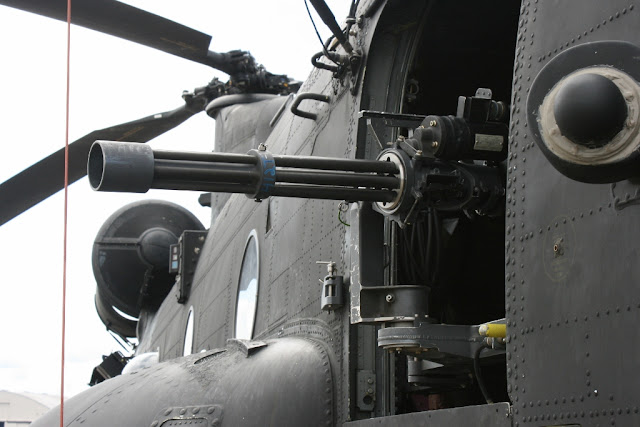 A rescue hoist/winch is mounted above the starboard-side forward door. A gunner's window / firing port is found on the port side fuselage, rear of the flight deck. A door is on the opposite side, which has a rescue hoist mounted over it. 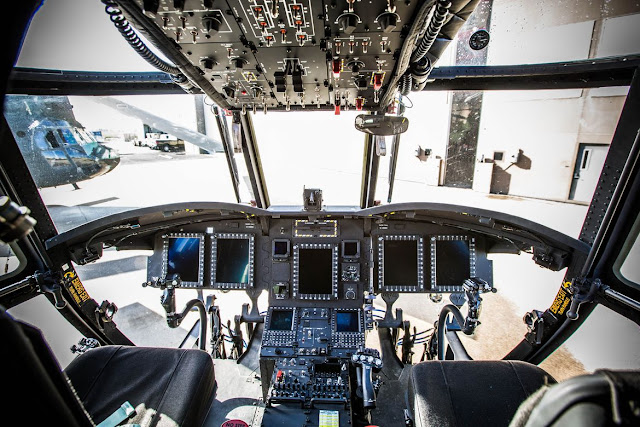 The MH-47G features a glass digital cockpit that is compatible with night vision goggles. It features 5 6x8 inch liquid crystal multi-function display (MFD) screens and 2 control display units (CDUs). The cockpit is to Common Avionics Architecture System (CAAS) standard, sharing the same processing and display units as the MH-60M Black Hawk. The CAAS was developed for the Night Stalkers then adopted by the Army and is now present throughout the Army's Chinook and Black Hawk fleets. 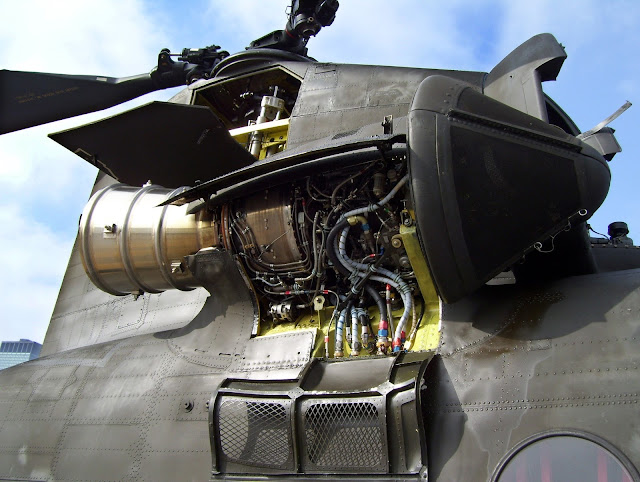 Upgrade kits are currently available from Honeywell for the T55 Family of engines. These will update the engine with latest technology standards. Compared to older T55 engines, the T55-714A upgrade provides a 22% power increase, a 7% improvement in fuel efficiency and a significant enhancement of reliability and maintainability. Altogether, the upgrade results in a 25% reduction in operation and support costs. Also, the time between engine overhauls will increase to 3,000 hours. The goal is to go to on-condition maintenance in the future. 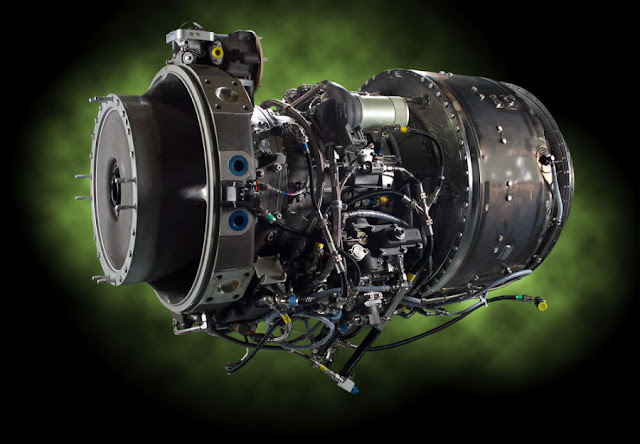