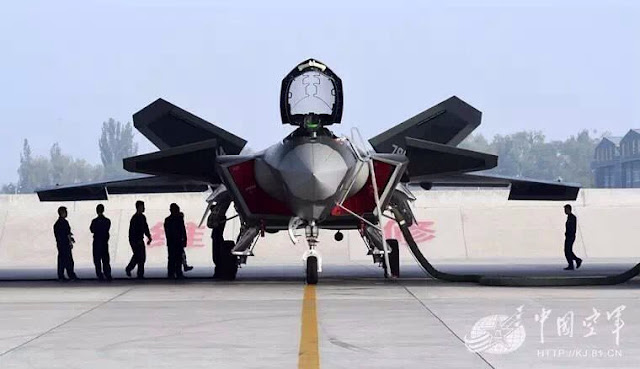 Global Times says in its report “Official media’s ‘official revelation’ of J-20’s detailed parameters? Military experts: Misreading” today that there has been a recent article in a WeChat account under PLA Daily titled “Leader pilot of fighter jets echelon: J-20 dominates in supersonic combat” that reveals the specifications and performance of China’s J-20 stealth fighter jet:

The article quotes Zhang Hao, leader pilot of the fighter jet echelon led by J-20s in the parade, as saying in an interview, “(J-20) not bad subsonic too, but once at supersonic speed, it dominates.”

It says that due to its stealth and high speed and maneuverability, J-20 has won 10 to 0 in lots of drills where it competes with non-stealth fighters.

It seems that the speed Mach 2.5 is true as WS-15 is regarded as the best engines for fighter jets. There has been report that China has developed a new and better material for aircraft engine.

However, this blogger believes that since China’s J-20 is the best, revealing its great capabilities will be a strong deterrence to those who intend to attack China. China’s enemy may develop better fighter jets to defeat J-20 in the future, but China is also developing a next generation of fighter jet much better than J-20. China must have the self-confidence that it is able to develop the best weapons in the world.