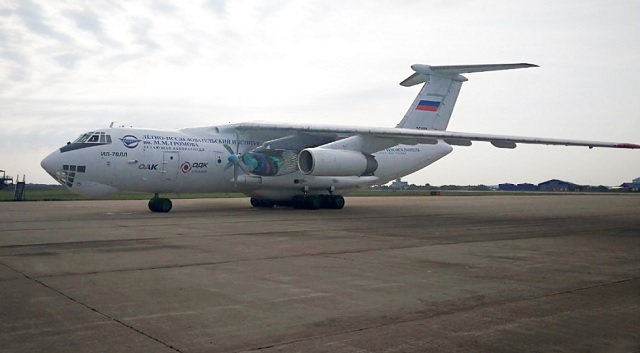 Ilyushin's efforts to resurrect Il-114 production have advanced with the maiden flight of an Il-76 testbed fitted with the turboprop engine intended for the regional type.

The flight took place on 12 September at the Gromov institute located at the Zhukovsky airfield outside Moscow.

Installed at the inboard starboard position of the Il-76, the Klimov TV7-117ST engine carries a six-blade Aerosila AV-112 propeller.

Russian aerospace firm United Aircraft, through the Ilyushin division, is aiming to restart manufacture of the Il-114 with a modernised variant designated the -300.

The aircraft is intended as a successor to Soviet-era Antonov An-24s and An-26s which are being withdrawn, as well as a competitor to imported ATR and Bombardier turboprops.
It will have a digital cockpit and be capable of operating in Category II meteorological conditions.

Ilyushin says the engine – an updated model of the TV7-117SM – features higher power and an automatic control system to regulate the engine and the propeller to derive greater efficiency. The powerplant is also designed for installation on the light Il-112V military transport.

United Engine says the tests will cover a full range of conditions, including different engine modes and operations at various altitudes. It states that the powerplant can deliver 3,000hp under normal circumstances and, if necessary, up to 3,600hp.