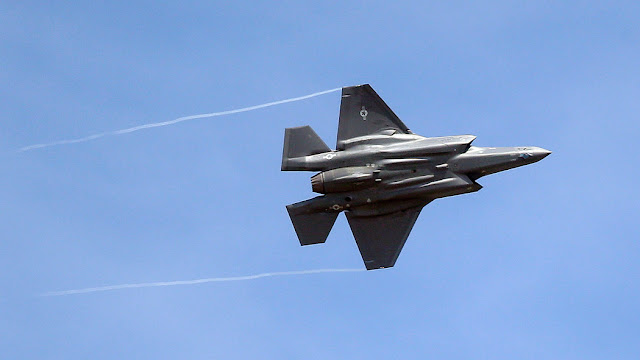 The Air Force now believes a rash of the incidents among F-35 pilots at Luke Air Force Base in Arizona might have been caused by a metering problem in the aircraft's oxygen system that occurs above 25,000 feet, Chief of Staff Gen. David Goldfein said Wednesday.

Flight operations at Luke resumed Wednesday after an 11-day grounding, but the Air Force is still investigating the oxygen systems with a team of experts at Wright-Patterson Air Force Base in Ohio. The Navy is also still investigating spikes in reported oxygen problems in its T-45 trainer jets and F/A-18 Hornets.

The Air Force placed altitude restrictions on the Luke F-35s and offered additional oxygen reserves and sensors as safety precautions.

"All five of the incidents that we had in the F-35 all occurred above 25,000 feet and so what we think is going on is that the metering system at a higher altitude may not be metering the oxygen at the level that is absolutely required," Goldfein said. "That is what the engineers are looking at."

He said the Air Force is working with F-35 maker Lockheed Martin and is confident an engineering fix will be found.

The Navy's T-45 problems resulted in a pilot boycott and a grounding of all student pilot flights at several training facilities across the country.

The service released the results of a review last week and pointed to the onboard oxygen generation system also used on the F-35 and a cockpit pressurization system as top suspects of the hypoxia-like incidents, which can cause sickness and panic among pilots.

Air Force Secretary Heather Wilson told the Washington Examiner that there is no definite timeline for making a permanent fix to prevent oxygen deprivation incidents.

"It's until we get the right answer," she said. "There's a lot of attention being placed on this."

Note: An earlier version of this story reported that Goldfein said Defense Secretary Jim Mattis had ordered a study of all tactical aircraft following the oxygen problems. The Air Force later said Goldfein misspoke during an interview Wednesday morning and no that Defense Department-wide study has been ordered.