US May Be Defenseless Against New Hypersonic Missiles 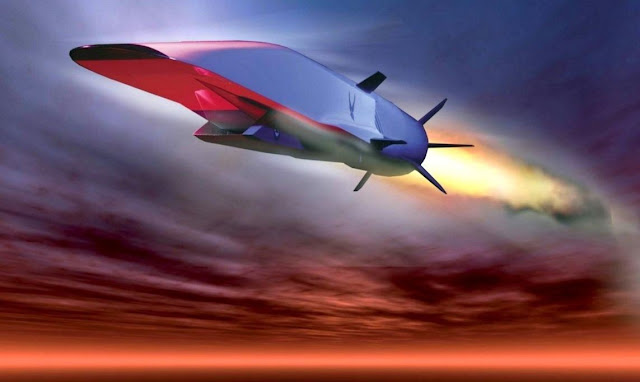 On June 3, Russia tested a hypersonic missile system a year ahead of a preannounced schedule I previously reported that it says will make all U.S. defense systems obsolete.

Named "Zircon," Russia’s international news site Sputnik suggests that the 4,600 mile per hour (six times the speed of sound) missile with its 250 mile range will require only three minutes and 15 seconds between launch and targeted impact.

The five-ton Zircon can reportedly be installed on Russia’s nuclear-powered strike ship Pyotr Veliky. Military analyst Vladimir Tuckkov expects that the system will be added to the country’s arsenal between 2018 and 2020. Russian authorities report that its radar target-seeker and an optical-electronic complex can trace and detect targets at hypersonic speed with capabilities to destroy the most advanced warships and aircraft carriers in a single strike.

Tim Ripley who covers defense issues for the Jane’s Defense Weekly has confirmed that Zircon could render all Western anti-aircraft defenses "obsolete." While warning that Russia appears to be far ahead of U.S. in development, he also observes "But that doesn’t mean there isn’t some black, super-secret project run by the U.S. Defense Advanced Research Projects Agency or DARPA."

Whether or not the U.S. presently actually has an effective defense countermeasure program in the works is publicly uncertain. If so, it is curious why, as reported by Bill Gertz in The Washington Times last February, the Pentagon’s Missile Defense Agency (MDA) had then just released a request seeking information to identify defensive weapon concepts to support an "analysis of alternatives" this year.

The MDA information request followed results of a study conducted by a panel of Air Force experts last fall which concluded that U.S. hypersonic weapon progress has fallen behind Russia and China. Their report criticized the Pentagon for having "no formal strategic operational concept or organizational sense of urgency." and faulted their "lack of leadership" in developing countermeasures and defense solutions.

Hypersonic missiles combine "scramjet" technology with advanced targeting systems that offer formidable offensive capabilities. Their propulsion is created by forcing air from the atmosphere into a combustor where it mixes with on-board fuel — rather than carrying both fuel and an oxidizer like traditional rockets. This feature makes them lighter and faster . . . therefore far more difficult to intercept.

Russia reportedly deployed an earlier third hypersonic glider warhead test on Oct. 25, 2016 aboard a RS-18 ballistic missile launched from the Dombarovsky air force base in the southern Urals. A nuclear-armed Yu-71 version is scheduled to go into operation by 2018 aboard a new Pak DA stealth bomber now under development. Jane’s Intelligence Review reports that Russia may be able to deploy up to 24 hypersonic nuclear delivery vehicles between 2020 and 2025.

The Congressional Sino-U.S. Economic and Security Review Commission reports that
China’s program is "progressing rapidly," and that a new powered version (rather than glider) under development may be fielded by 2025. The Commission warned that “The very high speeds of these weapons, combined with their maneuverability and ability to travel at lower, radar-evading altitudes, would make them far less vulnerable than existing missiles to current missile defenses.”

As former U.S. Navy Pacific Fleet intelligence director Captain Jim Fanell observes, "The threat of hypersonic missile attack not only impacts conventional warfare scenarios like we are seeing develop in the South and East China Sea, but it also puts U.S. nuclear defense strategies at risk."

Further assessing this grave circumstance in the Washington Free Beacon, House Armed Services subcommittee on sea power Chairman Randy Forbes, R-Va., said," Beijing is committed to up-ending both the conventional military and nuclear balance, with grave implications for the stability of Asia."

Russian Deputy Prime Minister Dmitri Rogozin declared, "Whoever is first to achieve mastery of hypersonic weapons" will overturn the principles of "how wars are waged."

We can fervently hope that a new Trump administration and Republican-controlled Congress will aggressively change this balance. Russia, China and the rest of the world must be given strong reasons to believe that America will stand prepared . . . not sit back with cause to be intimidated.

Larry Bell is an endowed professor of space architecture at the University of Houston where he founded the Sasakawa International Center for Space Architecture (SICSA) and the graduate program in space architecture. He is the author of “Scared Witless: Prophets and Profits of Climate Doom”(2015) and “Climate of Corruption: Politics and Power Behind the Global Warming Hoax” (2012). Read more of his reports — Click Here Now.