By 2017, the enterprise has undertaken to switch to a full production cycle for the manufacture of M90FR engines (27,000 horsepower) and create power units on their basis, the CEO said.

The Saturn enterprise is also preparing a basis for the trials of gas turbine engines for the Russian Navy. The enterprise has already developed M75RU (7,000 horsepower) and M70FRU (14,000 horsepower) engines, the company’s press office said. Source: engineeringrussia.wordpress.com

If the latest reports coming out of Russia regarding the indigenously made gas turbines are proved to be true, NPO Saturn might just save the day and shore up the completion of the remaining Admiral Gorshkov-class(Project 22350) frigates in the 2017-18 period as planned. While the Admiral Grigorovich-class is to receive its first gas turbines in mid-2018 according to President of the United Shipbuilding Corporation(OSK) Alexey Rakhmanov.
Troubles for two most ambitious blue water ships – 22350 and 11356 – undertaken since the Soviet Union’s collapse, began in 2014 as Ukrainian conflict ensued. Gas turbines and reduction gear assemblies used in Admiral Gorshkov and Admiral Grigorovich class power plants were made by the Ukrainian Zorya-Mashproekt “production complex”. Open hostilities between Moscow and Kiev, spurred Ukraine’s refusal to deliver much needed turbines to Russia. 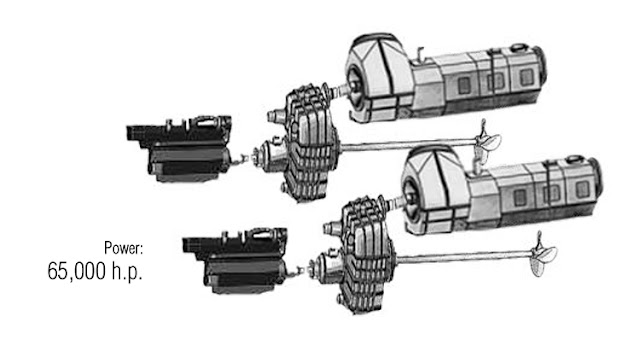 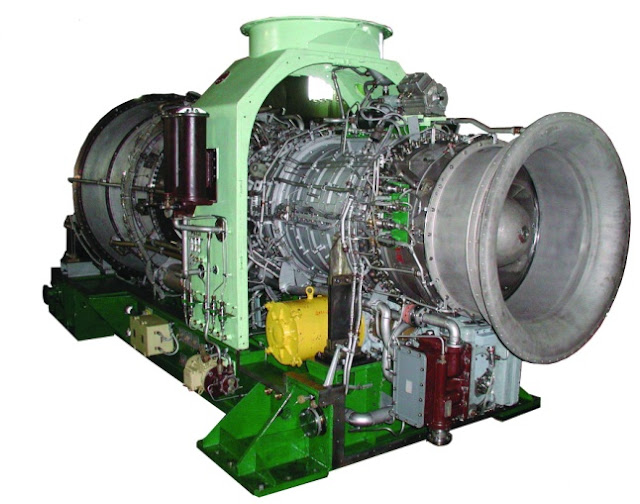 First and second Project 22350 ships – Admiral Gorshkov and Admiral Kasatonov – feature combined diesel and gas(CODAG) M55R propulsion plants that consist of two Mashproekt made DA91(UTG15000+) gas turbines, two Russian Kolomna made 10D49 diesel engines and Mashproekt made P055 reduction gear assembly. To come up with an indigenous gear reducers alternative should not prove massively challenging for the Russians but gas turbines require much greater investment, both in terms of finances and time required for development and testing phase. Development of an indigenous gas turbine for Project 22350 frigates commenced some years before the troubles in Ukraine in 2014. Russian NPO Saturn company was commissioned to start work on the M90FR turbine(main image), expecting to complete it in the 2017-18 time frame. When Ukraine refused to supply the tribunes back in 2015, work on new turbine was speeded up at the Kremlin’s behest. According to the latest reports, advanced testing phase of the new M90FR turbine has already commenced and first turbines are to be produced and installed on the third ship Admiral Golovko in 2017. Total of between 8 and 15 ships of the Admiral Gorshkov-class are planned for the Russian Navy in total. The fourth frigate – Admiral Isakov – has been launched in Novemebr, 2013. All the ships are to be constructed at St. Petersburg’s Severnoe shipyard, with the initial four to serve with Russia’s Northern Fleet. 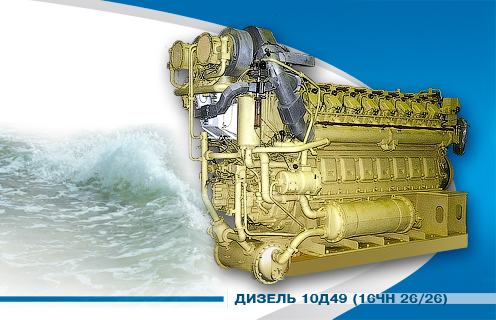 The other blue water casualty of the Russo-Ukrainian fallout was Project 11356 Admiral Grigorovich-class frigate. Initial three frigates – Admiral Grigorovich, Admiral Essen, Admiral Makarov – feature combined gas and gas (COGAG) M7N1 propulsion plants. Those consist of two DS71(UGT6000R) and DT59(UGT16000R) gas turbines each and R058, R063 and R1063 gear reducers, all designed and made in Ukraine by Zorya-Mashproekt. Consequently, prospect of completion of the remaining two Project 11356 frigates – Admiral Butakov and Admiral Istomin respectively – was rather questionable. Thus, in October 2016 on sidelines of the BRICS Summit in Goa, Russia and India formally agreed to transfer the remaining two ships to Indian Navy. Latest rumour has it that Admiral Butakov and Admiral Istomin will, after all, be completed for the Russian Navy as first planned. Admiral Essen was to join Admiral Grigorovich of the coast of Syria to supposedly test its weapon and battle systems in combat. It has been reported that on 25 Novemebr, 2016, as it was preparing to set sail for the Mediterranean, one of it’s shafts and propellers was damaged in an accident due to human error. 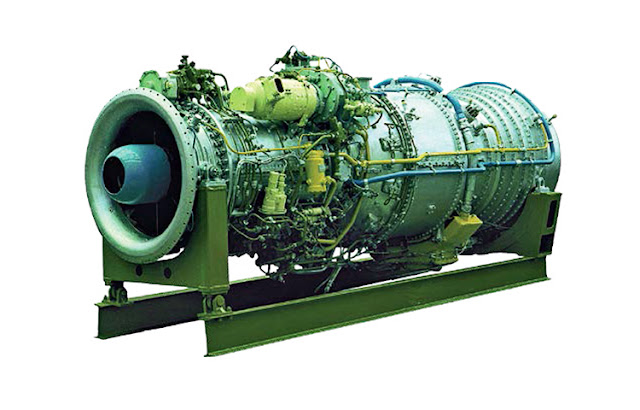 Admiral Makarov is still in sea trials and once commissioned is to join two other ships of the class over at the Russia’s Black Sea fleet in Crimea. Remaining two frigates, just like three before them, are being constructed at Yantar shipyard in the Russian enclave of Kaliningrad and are at various stages of completion at present. Source: russiandefence.com

Efficiency and lifetime of the new Russian-made marine gas turbine engines will outclass foreign equivalents by 10-15%, said president Putin on Tuesday, April 25 at the opening ceremony of the NPO Saturn’s new gas-turbine engine production facility. Most of these engines made by Saturn (Rybinsk, Russia) are more efficient than their Ukrainian counterparts: 36% vs 32%. However, comparing to Ukrainian products, not every Russian propulsion plant enjoys the advantage mentioned by the president. Below Mil.Today compared parameters of gas-turbine engines.


Saturn-made engines M70FRU and M90FR were made to substitute Ukrainian analogs DS71 and D090, respectively, a well-aware insider told Mil.Today. In the main propulsion plant M27 mounted in the Project 11540 (Yastreb-class) corvette Yaroslav Mudryi, D090 engines are boosters while DS71 are cruising ones. At that, the Russian engines have efficiency of 36%, compared to 32% of Ukrainian powerplants.

Special thanks to MKRM for the engine data 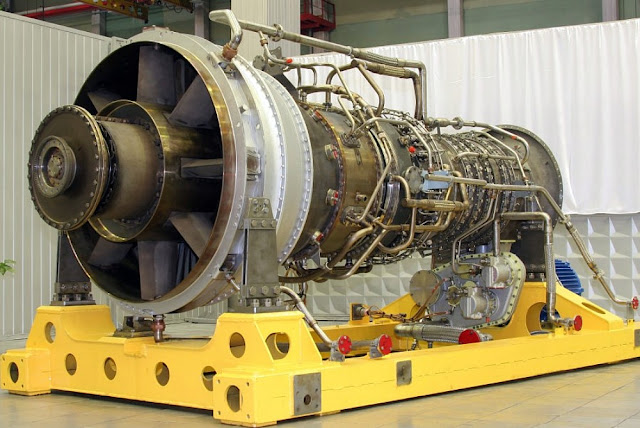 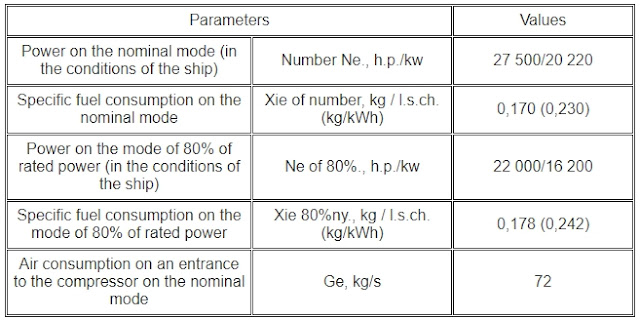 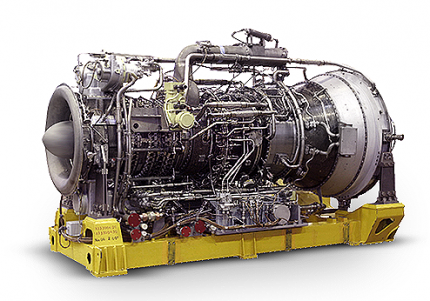 M70FRU is a naval turboshaft engine with 14,000 h.p., developed especially for the Russian Navy and intended for use on ships of all classes.

Dimensional characteristics, power characteristics and rotational velocity of power turbines allow to use the M70FRU engine in a whole range of older military ships of various classes in Russia and abroad.
Availability of versions working with gas fuel allow to use M70FRU as a drive for electric generators and gas compressors (superchargers) on all civil naval and sea-side object which have access to gas fuel (floating power stations, sea rigs, sea-port plats etc) 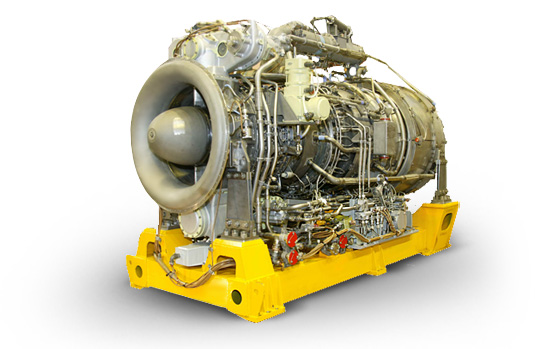 M75RU is a naval turboshaft engine with 7,000 h.p., developed specially for the Russian Navy. The first tests of the trial GTD M75RU, which became the first Russian naval turboshaft engine, took place in 2003. The decree of the state trial board certifying the GTD M75RU with the maximum of 7,000 h.p. was signed on the 25th November 2006. A series of engines are planned for development on the basis of M75RU specially for the Russian Navy, Border Control Services and civil ships.