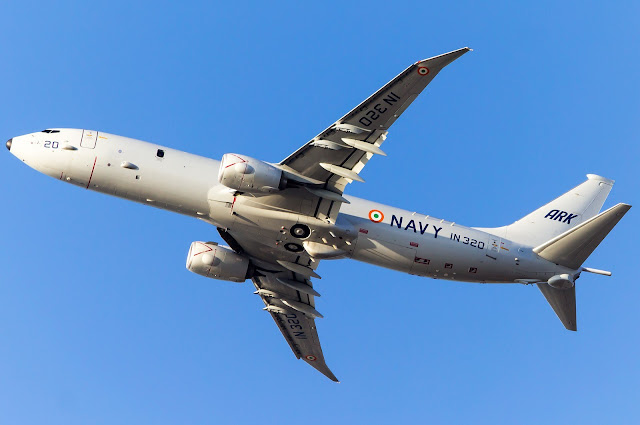 The Indian Navy is considering the acquisition of more Boeing P-8I aircraft for surveillance and Anti-Submarine Warfare (ASW), according to Navy chief Admiral Sunil Lanba.

In an interview to the magazine ‘India Strategic’, Admiral Lanba said that air surveillance capability is an important subset of naval operations and that while the proposal was on the table, he could not disclose the required numbers.

His predecessors have spoken of a requirement of 30 Long-Range Maritime Reconnaissance (LRMR) aircraft, under which the navy has already inducted eight aircraft and placed an order for four more.

Because of the overall tardy process of routine modernisation of the armed forces over the last 30 years, the Indian Navy has not been able to renew its inventory of submarines but the acquisition of the P-8I (I stands for India) has given it a very strong offensive capability to detect and hunt hostile submarines.

In fact, in terms of contemporary weapon technologies, the P-8I, often referred to as the “submarine killer”, is perhaps the most advanced system that any of the three Indian services have acquired in recent years. The aircraft was deployed in 2013 by the Indian Navy around the same time the US Navy did.

The Defence Ministry has officially stated that the P-8I is “capable of thrusting a punitive response and maintaining a watch over India’s immediate and extended areas of interest”.

Asked about the growing number of hostile submarines in the Indian Ocean, nearer home in fact, Admiral Lanba said: “As a professional military force, we constantly evaluate the maritime security environment in our areas of interest. We lay a lot of stress on Maritime Domain Awareness (MDA). Accordingly, we are fully seized of the presence and likely intentions of all extra-regional forces operating in the Indian Ocean. Our Navy is fully capable and ever ready to meet any challenges that may arise in the maritime domain.”

Significantly, the agreement for the P-8Is was signed on January 1, 2009, within a couple of months of the 26/11 Mumbai terror attacks which exposed the vulnerability of the country’s maritime defences. The attack, in fact, triggered the government to clear quite a few proposals for the armed forces as well as to review what should be done to ensure security of Indian waters, particularly the coastal belts on the country’s eastern and western seaboards.

The Navy is now the nodal agency for coordinating surveillance through satellites and aircraft and a network of police and small boats has also been integrated into the system.

The Navy and the Indian Coast Guard (ICG) also operate a number of HAL-made Dornier 228 aircraft, while some proposals for more LRMR and Medium-Range Maritime Reconnaissance (MRMR) have been on the table for the last few years.

Observed Admiral Lanba: “Every endeavour is being made to collectively ensure that our maritime security, of which coastal security is an important subset, is adequately strengthened.”

“A number of measures have been taken since 26/11 to strengthen maritime, coastal and offshore security by the concerned agencies in the country. These measures broadly include increasing capacity and capabilities of maritime security forces, enhanced surveillance and domain awareness of the maritime zones, increased regulation of maritime activities, streamlining intelligence-sharing between different agencies and strengthening overall maritime governance. There have been significant improvements in the operational response to developing situations at and from the seas,” he added.

At the national level, coordination of coastal security-related activities is being carried out by the National Committee for Strengthening Coastal and Maritime Security (NCSCMS).

The Navy had ordered eight P-8I aircraft in 2009 for $2.1 billion along with a training package. Weapons and torpedoes were extra as needed, and then, under the Options Clause, four more aircraft were ordered in August 2016.

The standard delivery schedule begins within three years of signing a contract and making the first payment. Boeing has said that it delivered the first lot of eight aircraft “on time, on cost” and helped set up their base at the INS Rajali Naval Air Station at Arakkonam in Tamil Nadu.

Boeing had been awarded a three-year contract in June last year for engineering and logistics support for the P-8I fleet. In January 2018, the Navy has been given approximately Rs 2,000 crore (almost $315 million) for a Training Solution along with a 10-year package for comprehensive maintenance service.

The training facility at INS Rajali will be the third of its kind after those in the US and Australia, and will train pilots, observers and ordnance and technical personnel. Spread over 60,000 sq ft, the facility would be completed by 2021.

A Training Simulator to be set up at the Naval Institute of Aeronautical Technology (NIAT), Kochi, for ab-initio training of the technical personnel is part of the package.

Pratyush Kumar, Boeing’s India President and Vice President International, had observed after signing the three-year contract last year: “Our team remains focused on executing our commitments to customers on schedule and cost. With this contract, the Indian Navy can be assured of achieving exceptional operational capability and readiness of the P-8I fleet.”

Boeing’s earlier contract was due to expire in October 2017.

The Indian variant has certain Indian components, including communication software and IFF (Identify Friend or Foe), to align with Indian naval and Air Force aircraft and net-centric systems.

It has 360-degree radar view, thanks to Raytheon’s AN/APY-40 forward looking radar’s 240-degree coverage and the rest from Telefonics aft-looking radar.

Built on the Boeing 737 frame, the P8-I is capable of detecting and destroying hostile submarines deep under the water. It has 11 hard points for carrying Harpoon anti-shipping missiles and depth charges, and five stations in the weapons bay for Raytheon-supplied Mk-54 torpedoes. Two hard points upfront are for Search and Rescue equipment.

There are five operator stations, and windows for outside views. All the systems are integrated with the onboard Mission Computer and Display System for control and data distribution in high speeds with ultra-high resolution. The APY 10 radar is developed keeping in mind not just the land but waters of the vast oceans as well, be it day or night. It is capable of tracking even small vessels in littoral and high seas environments.

The Indian variant also has the Magnetic Anomaly Detector (MAD) which measures minute variations and disturbances in the earth’s magnetic field caused by the underwater movement of steel-encased submarines.

India has already acquired a number of Harpoon Block II missiles for use both by the Navy and IAF, which also conducts maritime patrols.