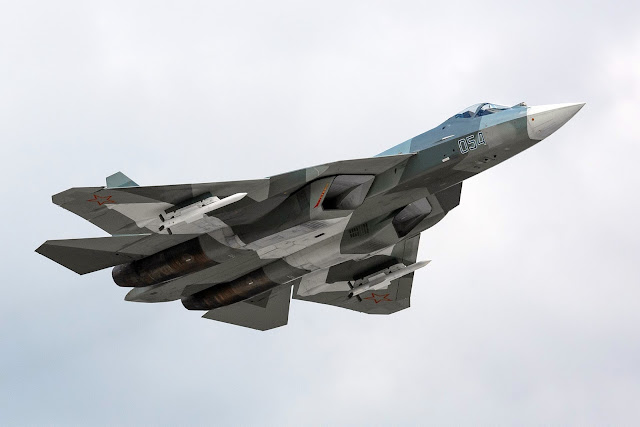 The protocols of information interoperability with almost all types of weapons have been agreed, according to Tactical Missiles Corporation CEO Boris Obnosov

MOSCOW, January 24. /TASS/. Russia’s Sukhoi Su-57 fifth-generation fighter jet has started flights with the most advanced air-launched weaponry on its board, Tactical Missiles Corporation CEO Boris Obnosov said in an interview with the TASS-published Bulletin of Military and Technical Cooperation.

"Tense work is underway. The entire set of precision weapons for this aircraft, both inside the fuselage and on an external sling, is being developed by the Corporation’s enterprises. We have switched to practical flights and I believe that we will see the result in the imminent future," Obnosov said, responding to a question about progress in implementing the program of developing air-launched weapons for the Su-57 fifth-generation fighter.

According to the Corporation’s chief executive, the protocols of information interoperability with almost all types of weapons have been agreed.

The Russian fifth-generation Perspective Aviation Complex of Frontline Aviation (PAK FA, also known as the T-50) fighter jet took to the skies for the first time in 2010. As was reported earlier, the cutting-edge fighter performed its first flight with a new engine on December 5.

Currently, the so-called first stage engine 117S is mounted on the Russian fighter. A new engine has not yet received its name and is conventionally designated as "the second stage engine."

It was reported earlier that Russia’s T-50 (PAK FA) fifth-generation fighter jet had received the serial index of Su-57. The experimental design work on the most advanced fighter jet should be completed in 2019 and its deliveries to the troops should begin at that time. As United Aircraft Corporation CEO Slyusar said, the pre-production batch will consist of 12 such planes.