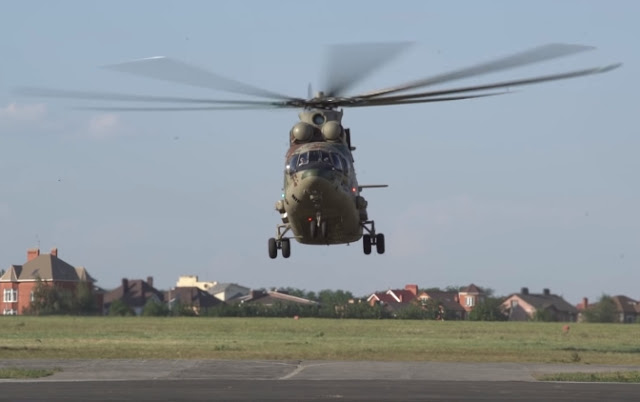 
Preliminary flight tests will start after the 2018 Army exhibition

MOSCOW, August 19. /TASS/. The upgraded heavy Mi-26T2V helicopter developed for the Russian aerospace forces has made its maiden flight, the press service of Russian Helicopters Co. said on Sunday.

The prototype rotorcraft, manufactured by Rosvertol, will soon fly to the Moscow region to take part in the 2018 Army forum, where it will be put on display, the press service added.

"The state armaments program for 2018-2027 provides for supplying this type of heavy helicopters to the army," Russian Helicopters cited Anatoly Serdyukov, industrial director of Rostec’s aviation cluster, as saying.

"I am sure the Mi-26T2 will be in high demand not only in Russia, but also in foreign countries. We see potential on the Asian, African and Middle East markets," he said.

Preliminary flight tests will start after the 2018 Army exhibition. State trials will follow.

"The successful completion of the maiden flight proves that the technical solutions used during the upgrading of the Mi-26 helicopter in the interests of the Russian defense ministry were right. We have managed to lower considerably the burden on the crew by means of automating the takeoff and landing procedures. Apart from that, the helicopter’s survivability has been increased thanks to a state-of-the-art onboard defense," said Andrei Boginsky, Director General of Russian Helicopters.

The upgraded Mi-26T2V helicopter will have a lifting capacity of 20 tonnes. The helicopter will be fitted out with modern NPK90-2 integrated onboard radio-electronic equipment and also with an onboard defensive aids system to protect the helicopter against missiles of various homing types. Mi-26T2V is meant for airlifting equipment, large size cargoes and paratroops.

The Mi-26T2V will be able to perform missions even in regions with complex physical and geographic features and unfavorable climatic conditions day and night over featureless terrain amid enemy counter-fire and information counter-measures.