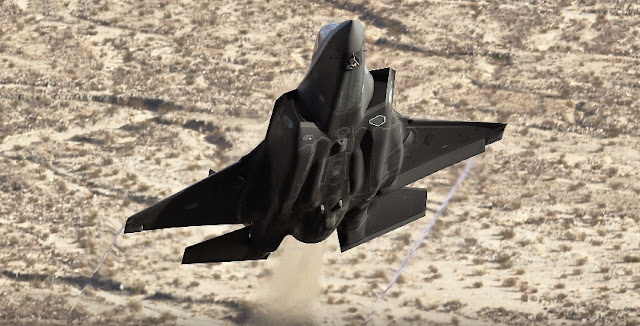 
U.S. President Donald Trump has appeared at a ceremony in Fort Drum, New York on Monday to sign a national defence bill that will prevent U.S. weapons sales to Turkey, including the new generation F-35 fighter jets ordered by the country.

The $716 billion John S. McCain National Defense Authorization Act for Fiscal Year 2019 (NDAA) calls a halt to weapons sales to Turkey until the Pentagon produces a report within 90 days detailing U.S.-Turkish relations and the effect of cutting Turkey out of the F-35 production chain.

Turkey received its first pair of a projected 100 F-35 fighters in June. However, the jets remain in the United States where their Turkish pilots are receiving training, and are not due to arrive in Turkey until at least Sep. 2019.

This, and the delivery of a further 28 currently on order, have been targeted in the NDAA due to Turkey’s purchase of S-400 missile defence systems from Russia and imprisonment of U.S. citizens, including Andrew Brunson, an evangelical pastor held on terror charges since Oct. 2016.

Senators Jeanne Shaheen and Thorn Tillis, the bill’s lead sponsors, said in a statement in July when the it was successfully negotiated that they “felt it inappropriate and dangerous to send Turkey F-35 aircraft at this time, while the Turkish government continues to wrongfully imprison Americans and U.S. Consulate staff.”

Since then, Brunson and the other detained U.S. citizens and employees have been at the centre of a diplomatic spat that has seen Trump slap sanctions on two Turkish ministers and double the tariffs on Turkish steel and aluminium, exacerbating the most drastic plunge in the lira's value seen in decades.

The Turks’ planned purchase of the S-400 systems, meanwhile, has raised concerns among North Atlantic Treaty Organisation members that they could be used to feed sensitive military data to Russia.

The removal of Turkey from the F-35 supply chain would be a blow for Turkish defence firms, at least ten of which are involved in production of components including fuselages and cockpit screens. Turkey has reportedly invested over $1 billion in the F-35 project.

Related articles:
US Senate approves decision to delay delivery of F-35 jets to Turkey
Congress moves to suspend F-35 sales to Turkey in defense bill
Turkish pilots to begin training on their first two F-35 fighters but the jets themselves to remain in U.S. custody for now
Trump guarantees F-35 deliveries to Ankara
U.S. to sanction Turkey for receiving S-400 missiles
Turkey won’t give up S-400 deal with Russia, presidential spox Kalın says
Fighter Sale to Turkey Could Pit Trump Against Congress
Turkey takes delivery of first two F-35 fighter jets in US
HIGHLY UNLIKELY: WHY ERDOGAN’S IDEA TO JOINTLY PRODUCE MISSILE SYSTEMS WITH RUSSIA IS STILLBORN
US Senate blocks F-35 sales to Turkey
Russia to complete delivery of S-400 missile systems for Turkey by May 2019