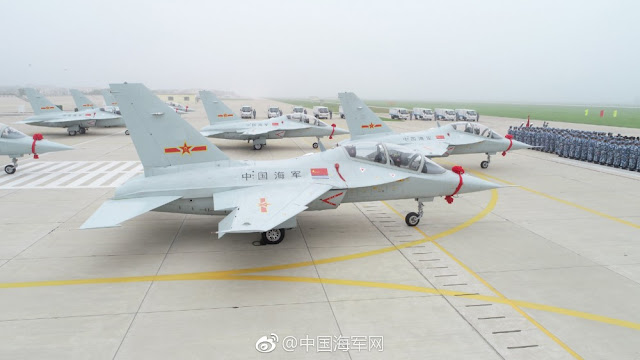 Images of the commissioning ceremony, which was held at the People’s Liberation Army Naval Aeronautical University, suggest that the regiment will have an initial 12 JL-10H platforms. Founded in 2017, the university is located near the city of Yantai, in China’s eastern Shandong Province, near the Yellow Sea (also known as West Sea).

The JL-10H, the first public images of which emerged in September 2017, will now supplement the single-engine Guizhou Aircraft Corporation (GAC) JL-9A/JL-9H, which entered service with the China’s People’s Liberation Army Navy Air Force (PLANAF) in 2014.

The JL-10H is the naval variant of the JL-10A/L-15A advanced trainer and differs from the JL-9A/JL-9AH in that it is powered by two turbofan engines that possibly have no afterburners.

Both trainers feature advanced cockpits with embedded simulation capabilities to assist the pilot’s transition to the PLANAF’s fourth-generation fighter aircraft – such as the Chengdu J-10A, the Shenyang J-11B, and the Shenyang J-15 – but neither is fitted with an arresting hook to support carrier-based training for arrested landings.