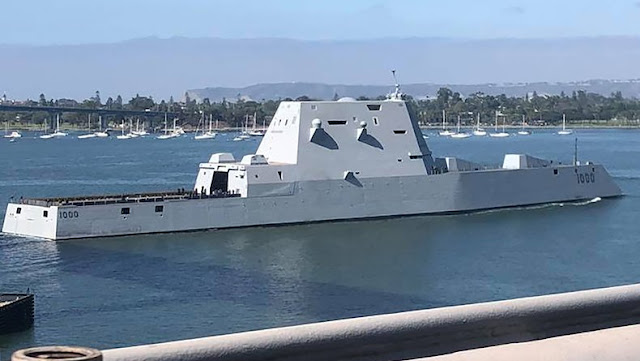 Tyler has been obsessed with all things aviation and military as long as he can remember. He went on to develop the defense-oriented website Foxtrot Alpha and can often be found with a camera around his neck, photographing aircraft and weaponry.

USS Zumwalt (DDG-1000) is a controversial ship, to say the least. After much fanfare among the mainstream press, the truth about the ship's watered-down design, tiny fleet size, useless deck guns, and the implications of these factors, among others, became much more clear. As we reported two years ago, in yet another cost-cutting move, the Navy decided to forego the ship's very stealth concept—which is the major reason the ships look the way they do, cost as much as they do, and have certain design tradeoffs for doing so—and bolt on communications systems and some sensors in a very unstealthy manner. These corner-cutting measures even included the addition of a rickety looking mast above the ship's deckhouse. Now we are getting our first glimpses of this disappointing configuration.

Zumwalt, which has been undergoing its combat systems outfitting for over a year and a half, emerged from its pier in San Diego Bay and took to open waters on September 11th, 2018. The vessel's otherworldly appearance drew a lot of attention. As a result, we have our first images of the near fully outfitted ship underway.