US Zumwalt Destroyers May One Day Shoot Nuclear Cruise Missiles


As US military strategists reconsider what will become of the $22 billion Zumwalt-class’ three ships, one of the possibilities on table is arming the destroyers with nuclear cruise missiles, Military.com reports.

The US government's Nuclear Posture Review calls for the development of new, small-yield, sea-launched cruise missiles (SLCMs), but the weapons need not necessarily be added to a submarine's weapons bay.

When pressed further, Hyten said, "we want to look at a number of options — everything from surface DDG 1000s [Zumwalt destroyers] to submarines, different types of submarines… that's what the president's budget has requested of us, to go look at those platforms, and we're going to walk down that path."

The Zumwalt program suffered a high number of technical issues and cost overruns that ultimately led to its cancellation. Instead of getting 32 ships as the original acquisition plans called for, the Navy will receive just three Zumwalt-type ships, unless Congress revives the program with fresh cash.

The US Navy's 2019 budget request states that the service decided to "refocus the primary mission of the Zumwalt-class destroyers from land attack to offensive surface strike." The 2019 budget requests $89 million for arming the ships with long-range SM-6 missiles, for use against air or sea targets up to 250 miles away.

Russia has developed and deployed nuclear weapons that violate the bilateral Intermediate Range Nuclear Forces Treaty, and the U.S. wants to nudge it back into compliance. But Moscow isn’t likely to “give up something to gain nothing from us in terms of reduction,” Mattis told lawmakers at the House Armed Services Committee. Source: defenseone.com 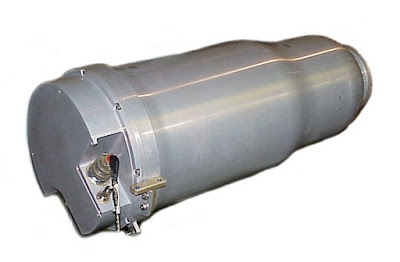 The W80-1 warhead is currently used on the Air Launched Cruise Missile (ALCM), but will be modified during a life-extension program and de-deployed with a new name: W80-4.

Under current plans, the ALCM will be retired in the mid-2020s and replaced with the more advanced LRSO, possibly starting in 2027.

The enormous cost of the program – $10-20 billion by some estimates – is robbing defense planners of resources needed for more important non-nuclear capabilities.

Even though the United States has thousands of nuclear warheads on ballistic missiles and is building a new penetrating bomber to deliver nuclear bombs, STRATCOM and Air Force leaders are arguing that a new nuclear cruise missile is needed as well.

But their description of the LRSO mission sounds a lot like old-fashioned nuclear warfighting that will add new military capabilities to the arsenal in conflict with the administration’s promise not to do so and reduce the role of nuclear weapons.

What Kind of Warhead?

The selection of the W80-1 warhead for the LRSO completes a multi-year process that also considered using the B61 and W84 warheads.

The B61 warhead has been used as the basis for a wide variety of warhead designs. It currently exists in five gravity bomb versions (B61-4, B61-4, B61-7, B61-10, B61-11) and was also used as the basis for the W85 warhead on the Pershing II ground-launched ballistic missile. After the Pershing II was eliminated by the INF Treaty, the W85 was converted into the B61-10. But the B61 was not selected for the LRSO partly because of concern about the risk of common-component failure from basing too many warheads on the same basic design.

The W84 was developed for the ground-launched cruise missile (BGM-109G), another weapon eliminated by the INF Treaty. As a more modern warhead, it includes a Fire Resistant Pit (which the W80-1 does not have) and a more advanced Permissive Action Link (PAL) use-control system. The W84 was retired from the stockpile in 2008 but was brought back as a LRSO candidate but was not selected, partly because not enough W84s were built to meet the requirement for the planned LRSO inventory.

In the past two year, NNSA has provided two very different cost estimates for the W80-4. The FY2014 Stockpile Stewardship and Management Plan (SSMP) published in June 2013 projected a total cost of approximately $11.6 billion through 2030. The FY2015 SSMP, in contrast, contained a significantly lower estimate: approximately $6.8 billion through 2033 (see graph below). 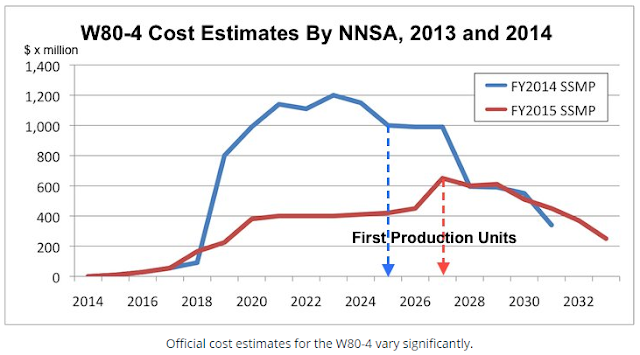 The W80-1 warhead has been selected to arm the new Long-Range Standoff (LRSO) missile, a $10-20 billion weapon system the Air Force plans to deploy in the late-2020s but can poorly afford.

Even though the United States has thousands of nuclear warheads on land- and sea-based ballistic missiles that can reach the same targets intended for the LRSO, the military argues that a new nuclear standoff weapon is needed to spare a new penetrating bomber from enemy air-defense threats.

Yet the same bomber will be also equipped with conventional weapons – some standoff, some not – that will expose it to the same kinds of threats anyway. So the claim that the LRSO is needed to spare the next-generation bomber from air-defense threats sounds a bit like a straw man argument.

The mission for the LRSO is vague at best and to the extent the Air Force has described one it sounds like a warfighting mission from the Cold War with nuclear cruise missiles shooting holes in enemy air defense systems. Given the conventional weapon systems that have been developed over the past two decades, it is highly questionable whether such a mission requires a nuclear cruise missile.

The AGM-129A is a subsonic, turbofan-powered, air-launched cruise missile. It is harder to detect, and has greater range and accuracy than the AGM-86 air-launched cruise missile. The ACM achieves maximum range through its highly efficient engine, aerodynamics and fuel loading. B-52H bombers can carry up to six AGM-129A missiles on each of two external pylons for a total of 12 per aircraft. When the threat is deep and heavily defended, the AGM-129 delivers the proven effectiveness of a cruise missile enhanced by stealth technology. Launched in quantities against enemy targets, the ACM's difficulty to detect, flight characteristics and range result in high probability that enemy targets will be eliminated. 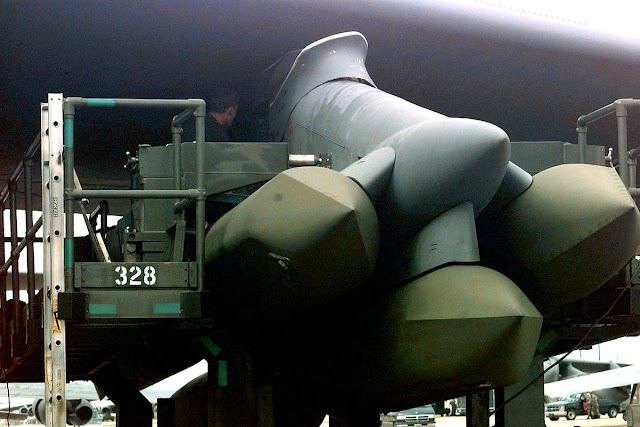 The AGM-129A's external shape is optimized for low observables characteristics and includes forward swept wings and control surfaces, a flush air intake and a flat exhaust. These, combined with radar-absorbing material and several other features, result in a missile that is virtually impossible to detect on radar.

The AGM-129A offers improved flexibility in target selection over other cruise missiles. Missiles are guided using a combination of inertial navigation and terrain contour matching enhanced with highly accurate speed updates provided by a laser Doppler velocimeter. These, combined with small size, low-altitude flight capability and a highly efficient fuel control system, give the United States a lethal deterrent capability well into the 21st century.

In 1982 the Air Force began studies for a new cruise missile with stealth characteristics after it became clear that the AGM-86B would soon be too easy to detect by future air defense systems. In 1983 General Dynamics was awarded a contract to develop the new AGM-129A ACM. The first test missile flew in 1985; the first missiles were delivered to the Air Force in mid-1990.

Plans called for an initial production of approximately 1,500 missiles. The end of the Cold War and subsequent budget cuts led the Air Force to cease production after 460 missiles, with the final delivery in 1993. Several corporate changes during production resulted in Raytheon Missile Systems as the final production firm. 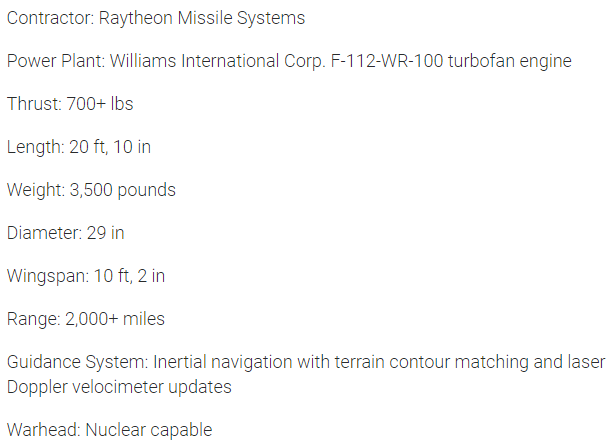 Related articles:
The Navy’s stealth destroyers to get new weapons and a new mission: killing ships