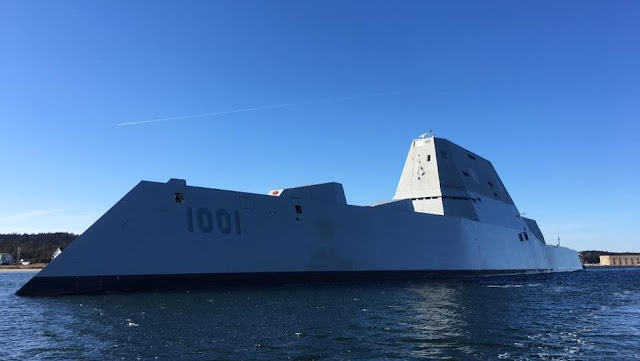 BATH, Maine — The Navy has accepted delivery of the second of three stealthy destroyers.

Capt. Kevin Smith, program manager from Program Executive Office Ships, said the shipbuilder and the Navy "incorporated many lessons" from construction of the first-in-class USS Zumwalt, which is homeported in San Diego. He said both parties "are proud of the end result."

Like the Zumwalt, the Monsoor features a stealthy shape, electric-drive propulsion, new radar and sonar, and powerful guns and missiles.

The final ship in the class, the Lyndon B. Johnson, is still under construction in Bath. It's due to be christened later this year or early in 2018.

Related articles:
USS Zumwalt to fire its first missile in 2019
US Zumwalt Destroyers may be armed with Nuclear Cruise Missiles in future
USS Michael Monsoor 'exceeds' specifications in acceptance trials
Navy has no plan to introduce new ammo for Zumwalt destroyers
New Requirements for DDG-1000 Focus on Surface Strike