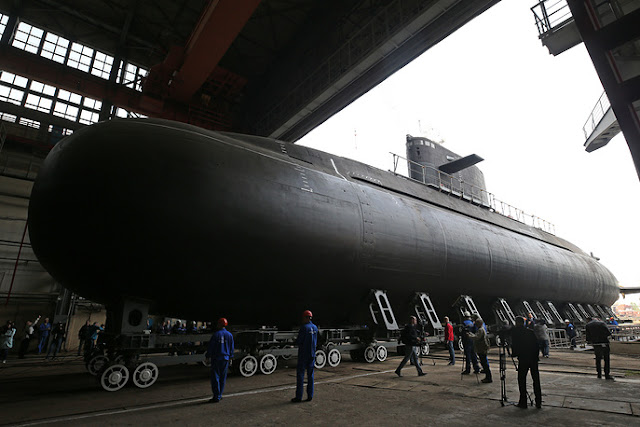 ST. PETERSBURG, September 20. /TASS/. A second diesel-electric submarine of project 677 (Lada class), The Kronshtadt, was launched in a special ceremony at the Admiralty Shipyards in St. Petersburg on Thursday, a TASS correspondent reports.

"The importance of this event is hard to overestimate. The submarine began to be built in 2005. There have been some pauses in construction work and in financing, but the launch day has come at last. The delay in construction work allowed for using the experience gained in building and operating the submarine The St. Petersburg. By all parameters this submarine surpasses its predecessor - project 636. We are certain that the future of non-nuclear submarine force of the Russian Navy should be pinned on project 677. There will be a large series," Admiralty Shipyards CEO Alexander Buzakov said at the ceremony.

Project 677 submarines of the Lada class belong with the fourth generation of diesel-electric subs. In the surface position its displacement is about 1,750 tonnes. The maximum speed under water is 21 knots. Lada has a crew of 35 and carries Kalibr cruise missiles.

The St. Petersburg is the lead ship of project 677. Its keel-laying ceremony took place in 1997. It was handed over to the Russian Navy in 1997 for experimental operation, which is due to end in 2019.

The Kronshtadt began to be built in 2005. At a certain point the project was paused to be resumed in 2013. Currently the Admiralty Shipyards is building another Lada class submarine - The Velikiye Luki.