The fourth Karakurt project 22800 "Burya" will be launched in December 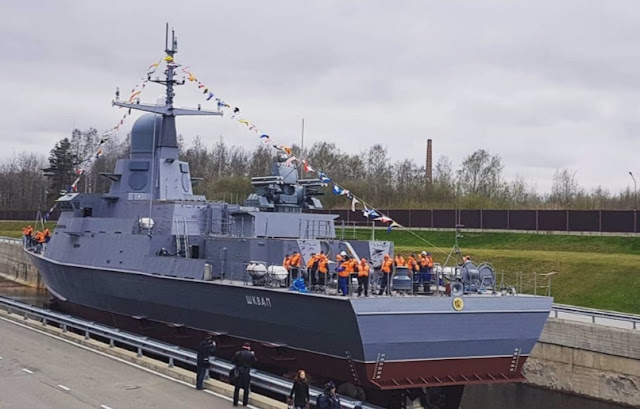 
The small rocket ship "Burya", being built at the Leningrad shipbuilding plant "Pella" under the project 22800, the cipher "Karakurt", will be launched in late October-early November 2018. About this Mil.Press FlotProm reported in the press service of the company. The list of guests of the ceremony is being clarified.

The Storm was laid on December 24, 2016. This is the fourth "Karakurt" being built on the Pella site in Otradny (Leningrad Region).

After the descent of the ship into the water it will continue to finish building afloat.

Unlike the first two MRKs of the project 22800, the “Storm” will receive the Pantsir-M anti-aircraft missile-gun complex instead of the AK-630 artillery mounts.

The transfer of the ship to the fleet is planned for 2020 and depends, among other things, on the delivery time of the M507 diesel engines manufactured by PJSC Zvezda. The company is still delaying the shipment of power plants for Karakurts for Pella and the Zelenodolsk plant to them. Gorky.

"As an informed industry source told the publication, the deadlines are shifted “right” almost monthly. According to him, the issue is under control of the deputy head of the Navy for armament, Vice Admiral Viktor Bursuk. The production of diesel engines and gearboxes on the “Star” is discussed every month at meetings attended by representatives of industry and the fleet. The source added that the delivery time for diesel engines and diesel generators for the Pella was once again shifted to November-December 2018."

Earlier, the term of the transfer of several main marine diesel engines M-507D-1-OM3 for Karakurts by the Star shifted from 2017 to 2018, and the DGAS-315 generators were supposed to be prepared almost a year later. Two such units were planned to be sent to shipbuilders in September 2017, but the delivery was postponed. In July 2018, Mil.Press FlotProm reported a 500 millionth Pella suit to the Zvezda plant.

In the Almaz Central Design Bureau, which designed the ship, Mil.Press FlotProm was told that the design of the MRK hull allows engines and diesel generators to be installed quickly enough. There are technological holes for this, and you will not need to cut the board or deck.

Small rocket ships of the project 22800 developed at the Central Marine Design Bureau "Almaz" as an alternative to the delay in the construction of frigates of the project 11356. The

The construction of 18 "Karakurts" for the Russian Navy is planned. The ships are building the Pella plant, including on the production site of the Feodosia plant More, and the Zelenodolsk plant to them. Gorky (in Zelenodolsk and on the territory of the Kerch shipbuilding plant "Zaliv"). The construction of the interregional companies was also ordered to the Amursky plant (Komsomolsk-on-Amur) and the Vladivostok East Shipyard.