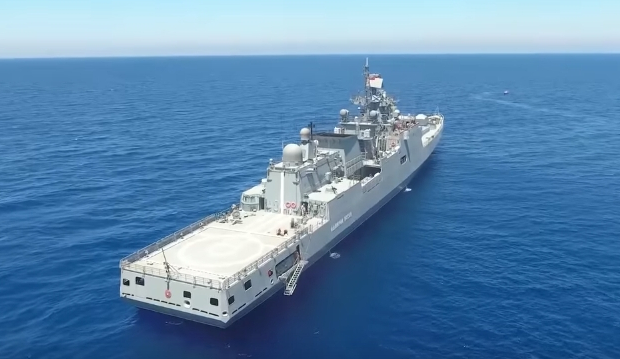 
Source: The contract for the purchase by India of frigates of the type "Admiral Grigorovich" will be signed before the end of the year.

Moscow and Delhi continue preparing for the execution of the transaction for the construction of four sentry ships (frigates) of project 11356 for the Indian Navy. The contract will be signed by the end of 2018, a source in the defense industry told Mil.Press FlotProm. According to him, the contract was planned to be signed on Friday, October 5, but the issue is still being worked out.

The source added that the signing was postponed for several weeks.

At the Yantar plant, where the construction of frigates of project 11356 was carried out, the publication was told that the company’s representatives did not go to India to conduct the relevant consultations. According to a source at the enterprise, the signing of the contract was postponed "at about the end of the fall."

"India can build frigates like the Admiral Grigorovich , and is already preparing for production. About this Mil.Press FlotProm said managing director of the company Yeoman Marine Services, engaged in the service of ships of the Indian Navy, including frigates such as "Talwar". The company deals in particular with the national project of import substitution "Make in India" and cooperates with a potential Indian shipbuilding factory."

It is assumed that the first two frigates will be built in Kaliningrad, and two more - at the Indian shipyard Goa Shipyard Limited . The amount of the upcoming transaction is about 2.5 billion dollars, while the calculations can be made in national currencies. According to preliminary data, the ships will equip gas turbine power plants of Ukrainian origin.

On October 5, at the Russian-Indian summit, Moscow and Delhi signed a contract for the supply of Triumph S-400 anti-aircraft missile systems, its amount is about $ 5 billion. The deal was the only item on the supply of arms, mentioned in the jointstatement Russia and India.

Related articles:
Russia and India to sign a contract on construction of four Project 11356 frigates
Indian Navy to buy four Russian frigates for $3 bn
Two frigates of the second series of the project 11356 will finish building for India