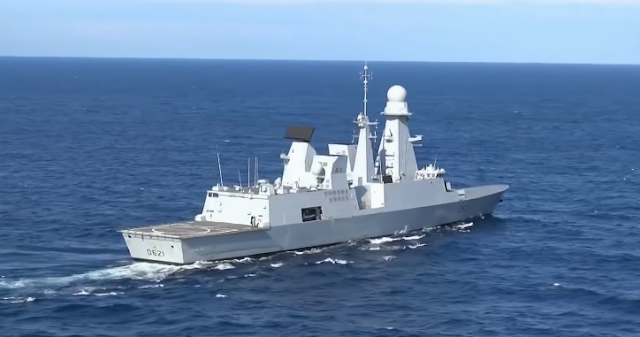 
October 18, 2018 (Google Translation) – In the darkness of the “Central Operation” (CO) of the Air Defense Frigate Chevalier Paul , a team of fifteen sailors work together to talk about radars, sonars, infrared telescopes and radio and radar interceptors. They try to make the most of their equipment to know everything around the frigate and provide the commander with the most accurate information possible about the operational environment of the ship.

Scrutinizing the screen of the aerial watchdog, the Second Master Marine is responsible for the detection and identification of all aircraft flying in the area in which the Chevalier Paul is deployed . An essential responsibility on a frigate of air defense whose vocation is to protect a naval force. Specialist air traffic, it is responsible for identifying the behaviors that may represent a threat to the force.

Engaged in the Navy in 2010 as a detector, she participated in five operational deployments of very different natures; from the contribution to the evacuation of nationals, to the training of pupil officers on the projection and command building Diksmuide, or to the independent assessment by France of the situation in the Middle East aboard buildings deployed in the eastern Mediterranean.

This rich embedded experience opened it to the world and made aware of security issues that are of interest to France.

The detector specialty combines advanced technical skills in electronics and strong operational requirement to ensure a good knowledge of the air-maritime space around the building or a naval force. “ I chose the detector profession to have a unique professional experience. Every day, I feel a certain pride to contribute directly to the operations and a great satisfaction when the mission is fulfilled. Eight years after my commitment I still have this small dose of adrenaline daily when I go up to take my shift at the CO. It is for me a rewarding job that teaches me something new every day, I feel useful. ”

Launched since 19 September 2014, operation CHAMMAL represents the French participation in OIR (Operation Inherent Resolve) and today mobilizes nearly 1,100 soldiers. At the request of the Iraqi government and in coordination with France’s allies present in the region, Operation CHAMMAL is based on two complementary pillars: a “training” pillar for Iraqi national security units and a “support” pillar. to support the action of local forces engaged on the ground against Daesh and to strike the military capabilities of the terrorist group.