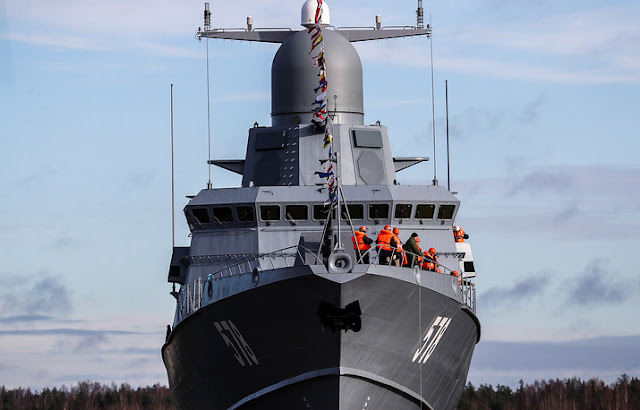 ST. PETERSBURG, October 23. /TASS/. The Project 22800 small missile ship Burya has been floated out at the Pella Shipyard in the Leningrad Region in northwest Russia, TASS reports from the scene.

"This is a remarkable day for us and let me express the words of gratitude on behalf of Russian Navy Commander-in-Chief [Vladimir] Korolyov for your labor in creating the warship of this series," Navy Shipbuilding Deputy Chief Captain 1st Rank Mikhail Krasnopeyev said, addressing the Shipyard’s staff.

"Let me also express the confidence that the pace of the construction work achieved will make it possible to start the ship’s factory and sea trials in 2019 and transfer it to us, naval sailors, in 2020," he said.

The Burya is the Project 22800 fourth warship and the third serial-produced corvette. It was laid down in December 2016 and before that the construction of the Project’s corvettes Uragan, Taifun and Shkval was launched at the Pella Shipyard.

The Project 22800 ‘Karakurt’ warships have been designed by specialists of the Almaz design bureau and are being built for the Russian Navy. They displace about 800 tonnes and can develop a speed of over 30 knots. Overall, the Russian Navy is set to get 18 Karakurt-class corvettes.

These warships are green-water surface combatants that can accomplish missions in peacetime and wartime on their own and in interaction with other forces.

The corvettes of this class are distinguished by their high maneuverability and increased seaworthiness and their superstructures and the hull have been designed using the stealth technology. The small missile ship Burya is armed with the Pantsyr-ME air defense missile and artillery system and the Kalibr strike missile complex.