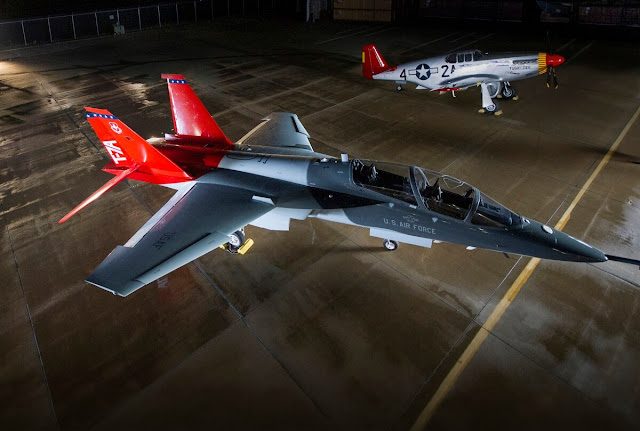 The U.S. Air Force has announced its name for its new advanced pilot training system: The T-7A Red Hawk.

The name is derived from the Red Tails – the Tuskegee Airmen – the first unit of African-American military pilots and support personnel who fought in World War II. They became known as the Red Tails due to the distinctive red paint on the tails of their aircraft.

Acting Secretary of the Air Force Matthew Donovan made the announcement during his speech at the 2019 Air Force Association’s Air, Space, and Cyber Conference.

Donovan was joined on stage by one of the original Tuskegee Airmen, Col. Charles McGee, who flew more than 400 combat missions in World War II, Korea, and Vietnam. Also seated in the audience were members of the East Coast Chapter of the Tuskegee Airmen.

“The name Red Hawk honors the legacy of Tuskegee Airmen and pays homage to their signature red-tailed aircraft from World War II,” Donovan said. “The name is also a tribute to the Curtiss P-40 Warhawk, an American fighter aircraft that first flew in 1938 and was flown by the 99th Fighter Squadron, the U.S. Army Air Forces’ first African American fighter squadron.”

A $9.2 billion contract awarded to Boeing in September 2018 calls for 351 T-7A aircraft, 46 simulators, and associated ground equipment to be delivered and installed, replacing Air Education and Training Command’s 57-year-old fleet of T-38C Talons.

“We are humbled to honor the legacy of the legendary Red Tail squadrons through production of the T-7A Red Hawk,” said Steve Parker, vice president, Boeing Advanced Pilot Training System. “The T-7A and the ground-based training system demonstrate a new level of performance in flight training to prepare the pilots of tomorrow.”

The first T-7A aircraft and simulators are scheduled to arrive at Joint Base San Antonio-Randolph, Texas, in 2023. All undergraduate pilot training bases will eventually transition from the T-38C to the T-7A. Those bases include Columbus Air Force Base, Mississippi; Laughlin AFB and Sheppard AFB, Texas; and Vance AFB, Oklahoma.

Boeing’s T-X could be coming to the Middle East — and not just as a trainer jet
Check out who’s helping Boeing build the next Air Force training jet
Boeing, and the art of capitalism
Boeing has awarded Saab to begin the engineering and manufacturing development (EMD) phase of the US Air Force T-X contract
Boeing-Saab wins $9B contract for USAF next training jet
U.S. Air Force poised to award a contract for its 350-plane next-generation trainer fleet