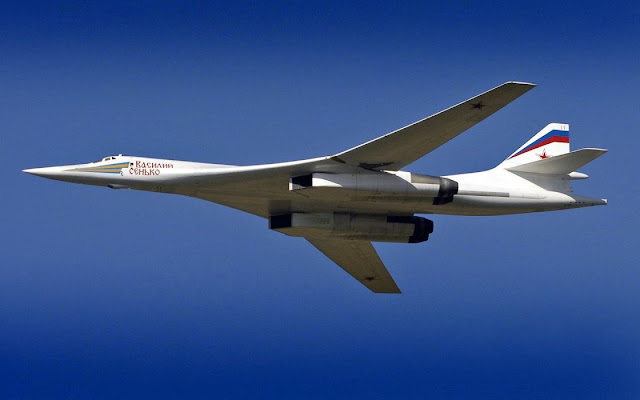 Venezuela has welcomed the arrival of Russian Tu-160 strategic bombers as an opportunity to demonstrate its resolve to defend the nation against possible foreign military intervention, with the help of “friends” if need be.

Two Tu-160 strategic bombers made a gracious landing at Simón Bolívar International Airport on Monday where they were greeted by the honor guard of the Venezuelan air force. Wearing orange pilot suits and combat helmets, Russian servicemen descended onto the runway where they were eager to present their colleagues with a scaled model of the 'White Swan' bomber, which they had just flown over 10,000 kilometers to reach the Caribbean shores in order to take part in “combined operational flights” with the Venezuelan Air Force.

“We are getting prepared to defend Venezuela when it is needed.”

“And we will do it with our friends who advocate respect-based relations between states,”  Defense Minister Vladimir Padrino Lopez said after the two bombers, together with An-124 transport and an Il-62 plane, landed in Venezuela.

While the Russian delegation painted their arrival to be a rare friendly visit, the Venezuelan Defence Ministry noted that 'Russia-Venezuela 2018' operational flights will represent a “demonstration of strength.”The training, Caracas maintains, will foster military-technical cooperation and facilitate the exchange of practical experience between the two militaries.

The Tu-160, nicknamed the ‘White Swan’ in Russia and designated as ‘Blackjack’ by NATO, is the largest supersonic combat aircraft in the world. The long-range aircraft, capable of carrying nuclear and conventional missiles, can cover a distance of more than 12,000 kilometers without refueling. The Russian Air Force conducted similar non-stop flights to Venezuela in 2008 and 2013.

The flight to Venezuela over the Atlantic Ocean, the Barents, Norwegian and Caribbean Seas did not go unnoticed, as Norwegian F-16 fighter jets shadowed the Russian planes during part of their flight, even though according to the Russian Defense Ministry the flight was conducted “in strict accordance with the international regulations on the use of airspace.” The bombers’ deployment to the Latin American nation follows Venezuelan President Nicolas Maduro’s visit to Moscow last week.