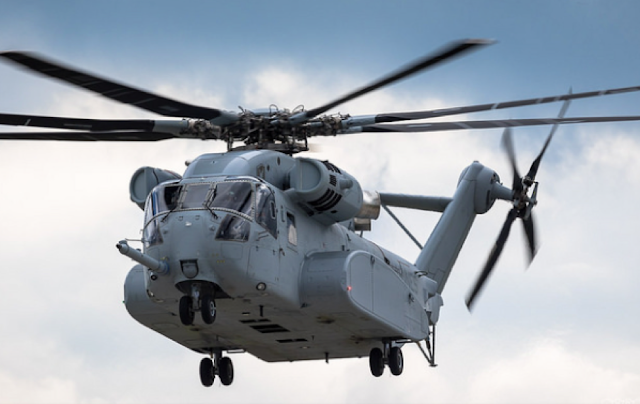 Lockheed Martin Corp.’s $31 billion King Stallion helicopter program for the U.S. Marine Corps is likely to miss its key milestone -- initial combat capability a year from now -- because of technical flaws found in development testing.
Resolving the problems is forcing a major restructuring of the program, with its development phase “taking longer than planned” as “additional test failures or issues” are discovered during flight tests, the Defense Contract Management Agency said in a statement.
The King Stallion, designated CH-53K, will be the same size as its predecessor, the Super Stallion, but will be able to externally lift 27,000 pounds (12,200 kilograms). That’s “more than triple the external load carrying capacity” of the CH-53E, according to a Lockheed fact sheet. The Navy’s plan to buy 200 of the copters for the Marines was a prime motivation for the contractor’s $9 billion acquisition of Sikorsky Aircraft from United Technologies Corp. in 2015.
Among the flaws discovered so far: exhaust gas sucked back into the engine, limited service life for parts for the main rotor gearbox, deficiencies with the tail rotor and driveshaft and late deliveries of redesigned parts.
The Defense Contract Management Agency estimates flight testing won’t be complete until May 2020, or five months after the scheduled time to declare the helicopter has an initial combat capability.
The Navy’s current budget plan calls for buying 61 of the helicopters through 2023, with annual procurement spending rising to $2.3 billion from $1.3 billion this year. In the next five-year plan for fiscal 2020 through fiscal 2024, the service is tentatively proposing to buy 10 fewer of the copters than planned and to reduce procurement funding over that period by as much as $1.2 billion. The figures could change before the president’s budget is presented in February.
‘Lots of Work’
James Geurts, the Navy’s top weapons buyer, “remains concerned and is closely monitoring cost, schedule and performance as lots of work remains,” his spokesman, Captain Danny Hernandez, said in a statement.
Bill Falk, Sikorsky’s program director for the CH-53K, said in an email that the company has fully staffed the flight test team “with our most experienced and seasoned engineers, pilots, maintainers and support staff.” The Navy and Sikorsky are “laser-focused on successfully executing and completing the test program in a safe and efficient manner to deliver the King Stallion” and “support operational deployment in 2023-2024,” he said.
Delays for the King Stallion, the first major acquisition program given a go-ahead by Defense Secretary Jim Mattis, may make it a prime candidate for congressional scrutiny as Democrats take control of the House in the new year.
Democrat members of the House Armed Services Committee’s air and land forces panel aggressively questioned the Marine Corps last year on the helicopter’s unit cost, an indication the troubled program will come under stronger scrutiny under the full committee’s incoming chairman, Representative Adam Smith.
The current projected unit acquisition cost, including development, is $139.5 million per aircraft, according to the latest Navy acquisition report. That’s 20 percent more than the baseline set in 2005. A 1982 law would require notifying Congress if the overrun reaches or exceeds 30 percent of the baseline.
The Navy and Bethesda, Maryland-based Lockheed until recently had placed a hold on negotiations for a second batch of six helicopters to better balance the risks of building aircraft as they’re still being developed, but talks are back on, Hernandez said.
The Navy is working with Lockheed to “re-evaluate and restructure the detailed program schedule, which includes extending completion” of the current development phase, Greg Kuntz, spokesman for the Naval Air Systems Command, said in an email.
The program’s restructuring “incorporates solutions for technical challenges,” including for the “exhaust gas re-ingestion” problem, he said. The Navy has “not yet made a formal determination” of a new initial combat capability date, Kuntz said.
The test program has achieved more than 1,200 flight hours, he said. But the program’s flight test pace and achievements were “less than projected” because technical problems were discovered “later than expected” or were not sufficiently resolved, he said.
(Updates with expected House oversight in 10th paragraph.)