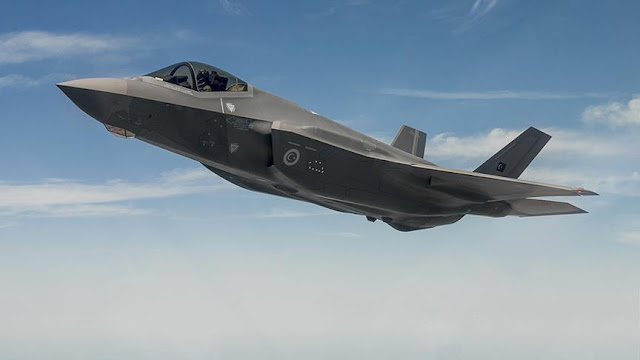 
The U.S. Senate added an important amendment to the defence-spending bill in May. The amendment to the National Defense Authorization Act, or NDAA, suggested removing Turkey from the F-35 advanced fighter jet programme and halt sales of the aircraft. The Senate asked the secretary of defence to submit an evaluation report to Congress within 90 days - during which time sales of F-35s to Turkey were suspended. The committee explicitly asked the Pentagon to detail the implications and impact of selling the F-35s to Turkey, considering the Turkish government also plans to purchase of Russian S-400 anti-aircraft missile systems.
The Senate was worried that sensitive information about the F-35s could be passed onto the Russian government through the S-400 defence systems.
U.S. Defense Secretary James Mattis last month delivered his department's assessment. We do not know what the report says in blacked-out portions, but the non-confidential summary describes Turkey as "a critical NATO ally", which seems a positive sign. In May, Mattis urged senators to not bar Turkey from purchasing the aircraft and opposed suspending their delivery. If we consider his position and the summary of the report, we can assume that the Defense Department is against the suspension of F-35 sales to Turkey.
Removing Turkey from the F-35 programme could adversely affect U.S. industry in two ways. Turkey's decision to halt the purchase of 100 F-35 aeroplanes might cost some jobs to the United States. The second issue is that some of the F-35 components are produced in Turkey.
Very successful Turkish defence companies such as Havelsan, Aselsan, Ayesaş and Alp Aviation produce vital components for the programme. Aselsan manufactures advanced optical elements for the F-35 Electro-Optical Targeting System as well as the F-35 CNI Avionic Interface Controller. Alp Aviation produces the airframe structure and assemblies, production landing gear components and engine parts and fuel pump parts. These Turkish companies invested more than $1.25 billion to establish the necessary production lines. Turkey is the only source in the world for some specific items in the production. If Turkey stopped manufacturing these items, the main-supplier Lockheed would need to search for alternative suppliers. According to a statement in May, finding other suppliers might cause delays of up to one year in the production of the F-35s.
An important matter to address is this; can't the Russians get the same sensitive information about F-35s, without the S-400 air defence system? Only military experts can answer this, but it is quite apparent that these U.S. senators are using the issue to punish Turkey. The text of the amendment strengthens the likelihood of this possibility.
On the other hand, the Mattis report has some negative statements about Turkey as well. There is also some speculation that Turkey's status as a Level 3 partner in the project could be in jeopardy. If true, this means that Mattis changed his previous position and is now inclined to suspend F-35 sales to Turkey. Indeed, the U.S. Congress suspended F-35 sales to Turkey after receiving the Mattis report.
The U.S. Defense Department might try to smooth things over by reminding Congress of Turkey's strategic importance, but at the moment it is hard to say the U.S. mood favours Turkey.
One of the co-signatories of the amendment to the NDAA, Senator Thom Tillis, said Turkey must fulfil other conditions. Tillis said in a statement: "It appears that DoD has determined that Turkey has met its obligations to purchase F-35s pursuant to the provision in the NDAA. The release of Pastor Brunson was a positive step that opens up the opportunity for improved relations between the U.S. and Turkey. There are still some outstanding issues that must be addressed moving forward, including Turkey’s purchase of the S-400 from Russia and Turkey’s detention of other American citizens."
Turkey freed American evangelical pastor Andrew Brunson after some two years in jail and detention. Senators also demanded Brunson’s release and that of Serkan Gölge, a Turkish-American NASA scientist still detained in Turkey, in their amendment to the NDAA.
Last month the Council on Foreign Relations, a U.S. think-tank, issued a 36-page report about Turkey's image in the United States. This think-tank is known as an organisation very much in line with the thinking of decision-makers in the United States. In the foreword of this report, entitled "Neither friend nor foe," the president of the organisation Richard Haas said: "The time has come for the United States to rethink its approach toward Turkey. What we are witnessing is the gradual but steady demise of a relationship; Turkey may be an ally in the formal sense, but it is no partner. Nor is it much of a democracy."
Of course, this is nothing more than a report by one think-tank. The U.S. media has published similar criticism of Turkey in the past, but the intensity of this censure could be a first. It should also be noted that this criticism comes from an organisation that shapes the opinions of decision-makers in the United States. This could be the beginning of a new era in Turkish-American relations. The Pentagon might find it harder to change the tone in Washington under such conditions.

No ‘devastating impact’ to F-35 industrial base if Turkey removed from program, says US Air Force official
Jim Mattis delivers report to Congress that could lift freeze on F-35 jets to Turkey
Pentagon report on Turkey's F-35 program delivered to US Congress
Lockheed’s F-35 Has a Turkey Problem
Turkey to get 2 more F-35s in March 2019
Joint US House and Senate conference committee upheld restrictions on the sale of F-35s to Turkey
Washington's F-35 bluff against Ankara

Turkish fighter pilot carries out first flight in US with F-35 jet
US blocking transfer of F-35 jets to Turkey for fear that Russian missile defense system would expose the F-35 is not as stealthy as claimed
Trump signs defence act preventing weapons sales to Turkey
US Senate approves decision to delay delivery of F-35 jets to Turkey
Congress moves to suspend F-35 sales to Turkey in defense bill
Turkish pilots to begin training on their first two F-35 fighters but the jets themselves to remain in U.S. custody for now
Trump guarantees F-35 deliveries to Ankara