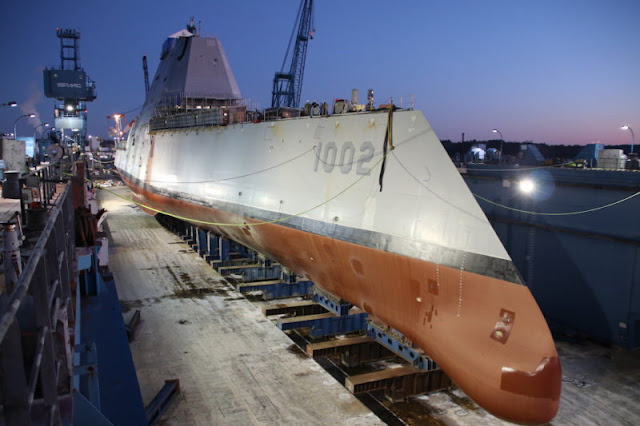 Like the two other ships in the class, the launching of the future USS Lyndon B. Johnson (DDG 1002) was actually a multi-day process that included moving the ship from the on-land facility to the dry dock, which was then slowly flooded.
With the ship now in the water, final outfitting and production can commence.
“It’s important for the DDG 1000 program and shipyard to reach this major milestone,” said Capt. Kevin Smith, DDG 1000 program manager, Program Executive Office (PEO) Ships. “With the first two ships of the class underway, we are excited to continue the next phase of construction of the future Lyndon B. Johnson.”
Zumwalt-class destroyers feature state-of-the-art electric propulsion, a tumblehome hull, and a stealth design. They are also equipped with the most advanced warfighting technology and weaponry, making them capable of performing a range of deterrence, power projection, sea control, and command and control missions.
The future Lyndon B. Johnson is the third and final DDG 1000 Zumwalt-class ship, and it is scheduled to be christened in the spring of 2019. The first ship in the class, USS Zumwalt (DDG-1000), was commissioned in October 2016. The second ship, USS Michael Monsoor (DDG-1001), was christened in June 2016 and is set for commissioning in 2019.
Each ship in the class displaces 15,995 metric tons and measures 610-feet long and 80.7-feet in beam. The vessels have top speed of 30 knots and crew of 175.
“The crew of Lyndon B. Johnson looks forward to bringing this great warship honoring our 36th President to life, and we’re proud to have the opportunity to be present for this important step in the ship’s construction,” said Capt. Jeremy Gray, prospective commanding officer, DDG 1002. “It is truly impressive to see the ship afloat in the Kennebec River for the first time and we look forward to taking her to sea.”
As one of the Defense Department’s largest acquisition organizations, PEO Ships is responsible for executing the development and procurement of all destroyers, amphibious ships, special mission and support ships, and special warfare craft.