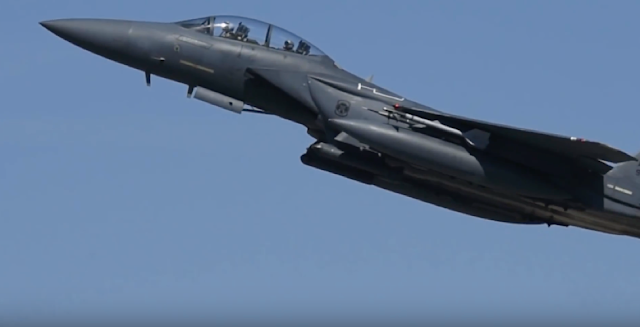 
The Pentagon is planning to request $1.2 billion for 12 Boeing F-15 X fighter aircraft—the newest version of the decades-old jet—in its fiscal year 2020 budget request, according to two people familiar with the decision who asked not to be named because it’s not yet official.
The decision to buy the newest kind of F-15 aircraft, so far only sold to U.S. allies, comes from the Pentagon’s top leadership, including with some prodding from Deputy Secretary of Defense Pat Shanahan, and not the Air Force, which would be flying the planes, the two people said. Shanahan, a former Boeing Co. executive, recused himself from any decisions related to Boeing when he was confirmed by the Senate.
But an administration official, who asked not to be named, said Shanahan doesn’t make decisions on Boeing programs. The official wouldn’t confirm the budget request, and none of the budget decisions are final until the Pentagon submits its request on Feb. 4.

The reason for buying the F-15X aircraft would be to start replacing the F-15 C variants for the Air National Guard, which have become to expensive to overhaul, one of the people said. Production of the C variants ended in the 1980, said Richard Aboulafia, an expert on military aircraft and vice president of the Teal Group, a consulting firm.
Boeing builds the F-15 in St. Louis, where it also builds the Super Hornets, an aircraft that has benefited from congressional largesse over the last several years. Boeing has kept the F-15 design current, said Aboulafia.

“They have been able to do that because of sales to Korea, Singapore, Saudi Arabia, and Qatar,” he said in a telephone interview, adding that the planes have new systems and sensors.
“The F-15 is kind of in a class by itself in range and performance,” Aboulafia said. It’s faster, carries a lot more and can go a lot farther than the F-35 Joint Strike Fighter, the newest and the most expensive Pentagon program, The F-35 is, however, stealthy, which the F-15 isn’t, Aboulafia said.
The decision to buy the newest version of the F-15 may not sit well with F-35 supporters within the Pentagon and in Congress because it would essentially compete for funding.
F-15C, -D, and -E models participated in Operation Desert Storm in 1991, according to information on Boeing’s website. The F-15 notched 32 of 36 U.S. Air Force air-to-air victories and struck Iraqi ground targets. F-15s served in Bosnia in 1994 and downed three Serbian MiG-29 fighters in Operation Allied Force in 1999. They enforced no-fly zones over Iraq in the 1990s. Eagles also hit Afghan targets in Operation Enduring Freedom, and the F-15E version performed air-to-ground missions in Operation Iraqi Freedom.
Boeing declined to comment on Pentagon budget deliberations.
about.bgov.com

Israel Air Force selects F-15 IA over the F-35I as the new fighter jet to be acquired overthe next decade
U.S. Air Force not interested in F-15X or hybrid F-22/F-35
Lockheed Pitching F-22/F-35 Hybrid to U.S. Air Force
F-15X is it A Huge Waste Of Time and Money?
Details of the F-15X That Boeing is Pitching the US Air Force
Lockheed Martin has provided the Japanese government with sensitive information on the F-22 Raptor design
Boeing is pitching the U.S. Air Force a new F-15 fighter jet
Israel to purchase 25 Advanced F-15s and upgrade existing fleet
US Air Force still considering retiring many of its F-15 Eagle fighters