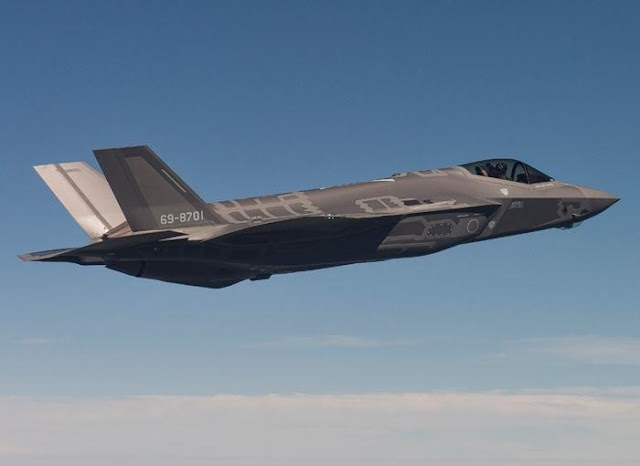 
The move is designed to make the country better able to defend itself against a more aggressive China and revanchist Russia.

TOKYO — Japan plans to purchase nearly 150 F-35 stealth fighter jets from the US — a move intended to revitalize the country’s aging military equipment to make the country better able to defend itself against a more aggressive China and revanchist Russia.

Keitaro Ohno, a leading defense official in Japan’s parliament, told me and a small group of US reporters in his Tokyo office on Tuesday that the government will announce the decision during a rollout of new defense guidelines next week.
It’s a big purchase for Japan, as each F-35 costs about $100 million. The goal, Ohno said, is to replace 147 older fighter jets with the more modern planes, giving the country greater capabilities to defend itself military.
But global reactions will likely differ strongly. The news will surely please President Donald Trump, who has long criticized Japan for not investing enough in America’s economy.
But it will almost certainly anger China, Japan’s biggest regional military competitor. That’s because not only will the purchase greatly improve Japan’s air defenses, it will also help the country develop closer ties with the US — right as China and the US are locked in an increasingly high-stakes trade war.
Japan’s desire for America’s high-tech F-35 planes, which have stealth capabilities, has long been known, and Japanese officials have signaled the decision in recent weeks. But this is the first time a senior Japanese official has confirmed that Japan plans to make the sizable purchase.
The New York Times also reported on Tuesday that Japan plans to convert some of its biggest warships into aircraft carriers that could carry the new F-35s. That would add Japan to the small club of countries with an aircraft carrier — further adding to rising tensions with China.

Japan’s military is called the Self-Defense Forces — and that’s not just an artful euphemism for “armed forces.” It’s called that because, as outlined in the country’s post-WWII constitution, it’s only authorized to defend the nation from threats and is barred from attacking any other forces outright.
Which means the new F-35s probably won’t be attacking any Chinese ships anytime soon.But the purchase of the more capable aircraft — some of which can take off vertically as well as in the normal way — adds firepower to Japan’s forces.
It will also make the country’s military more able to operate alongside American troops, as they will both have the same warplanes now.
It’s still possible Japan could change its mind, though. An economic downturn or a defeat for Prime Minister Shinzo Abe’s ruling party in next year’s elections could potentially force a rethink in the decision.
But neither of those outcomes seem particularly likely right now, which means Japan’s militarily will probably feature a whole new flock of shiny new American warplanes in the near future.
Source: www.vox.com