The German Navy is getting an additional five K130 corvettes under a €2.4 billion contract signed with the ARGE K130 consortium in September 2017. Composed of Lürssen Werft, ThyssenKrupp Marine Systems and the subsequently incorporated German Naval Yards Kiel, the team is to deliver the five ships by 2025.

The corvettes will be named Köln, Emden, Karlsruhe, Augsburg, and Lübeck.

A contract for the delivery of Super Rapid guns is the latest in a series of Leonardo deliveries to the German Navy. The Italian company delivered its first 76/62 Compact system to Germany in the 70s. The most recent supplies include the 127/64 Vulcano naval guns and the Hitrole 12.7 turrets for the F125 frigate.

The OTO 76/62 SR system itself is in service with almost 60 navies worldwide, Leonardo says. It is capable of sustaining a fire rate of up to 120 strokes per minute and flexible enough for use in anti-aircraft and anti-missile defense and for point defense.

Depending on the configuration, the OTO 76/62 Super Rapid could include the STRALES capability to fire DART guided ammunition specifically designed for the engagement of fast maneuvering targets, and the VULCANO GPS-guided long-range ammunition.

In addition to the guns, the corvettes will carry Saab’s RBS15 Mk3 anti-ship missiles, the RIM-116 Rolling Airframe Missile (RAM) system and will feature combat systems developed by Atlas Elektronik and Thales. 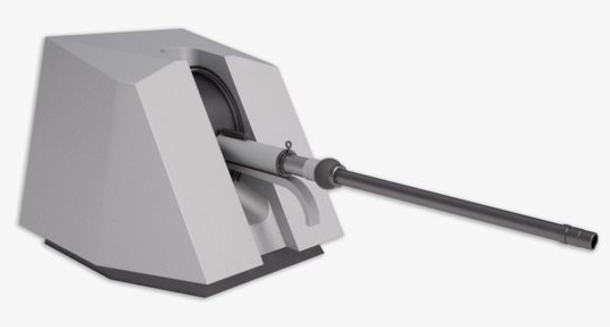 Capability for very effective engagement of shore based targets is also provided for unique multi-role performance.

The 76/62 SR is suitable for installation on ships of any type and class, including small naval units.

Interface to a large variety of ship's Combat Management System and/or FCS/EOS is provided, according to digital as well as analogical standard, including open architecture.
The Firing rate can be selected from single shot to firing 120 rds/min.

In operational condition the tactical time is less than 3 seconds and the standard deviation at firing is less than 0.3 mrad, thus providing excellent accuracy.

The 76/62 SR (together with the 76/62 Compact) is the only medium caliber naval gun available in the capable of sustained fire, which is a fundamental requirement in any scenario involving the simultaneous engagement of multiple maneuvering target, as requested by the emerging asymmetric warfare scenarios.

Automatic loading is provided through a revolving magazine and rapid reloading is easily undertaken even during firing action by two ammunition handlers.

Standard supply includes the new Digital Control Console (DCC) capitalizing the digital technology to increase the functions available to the operator and to the maintainers.
The 76/62 SR is ready for operating the 3AP Multifunction Programmable Fuse.

The in service and new 76/62 SR,  have the necessary flexibility for being fitted with optional: 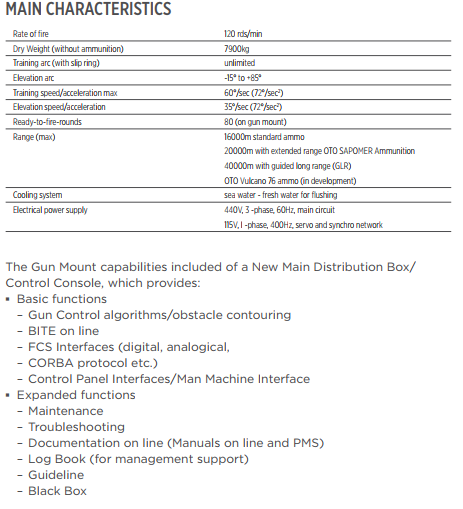