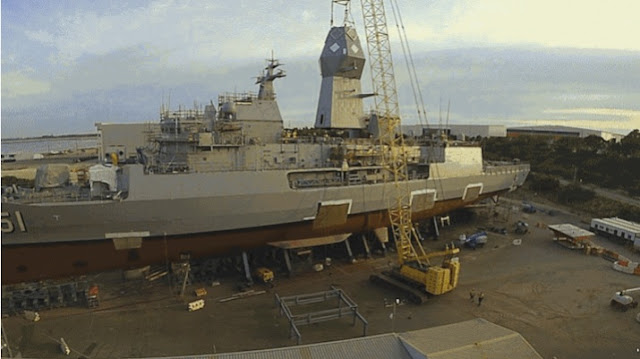 The installation of the mast completes one of the last major works being carried out on the frigate at BAE Systems Australia’s Henderson facility.

Following the AMCAP, HMAS Arunta will be undocked before the end of this year, after which the ship will set sail to undertake sea trials ahead of a planned return to service next year.

The replacement mast has been built by BAE Systems as part of the Warship Asset Management Agreement (WAMA) between the company, SAAB Australia, Naval Ship Management (NSM) and the Commonwealth of Australia.

Being taller and wider than the existing mast, the new equipment can accommodate the latest CEA L-Band radar system while maintaining the existing anti-ship missile defence radar capability.

Under the mid-life upgrade project, the frigate will be equipped with modified ventilation systems, new sewage systems and a new communications suite.

The vessel will also undergo major enhancements to its control and monitoring system, in addition to engine modifications to increase power and efficiency.

BAE Systems chief executive Gabby Costigan said: “Our maritime sustainment team at Henderson and Williamstown (Victoria) has established and maintained an important maritime engineering and programme management capability through the sustainment of the Anzac fleet over more than two decades through an Alliance arrangement.

“That capability is critical to ensure that the project achieves quality, cost and schedule milestones, despite the enormous complexity of such work.”

Approximately 650 employees are currently working on the upgrade of the Australian Navy’s Anzac-class frigates, including 400 BAE Systems Australia employees.