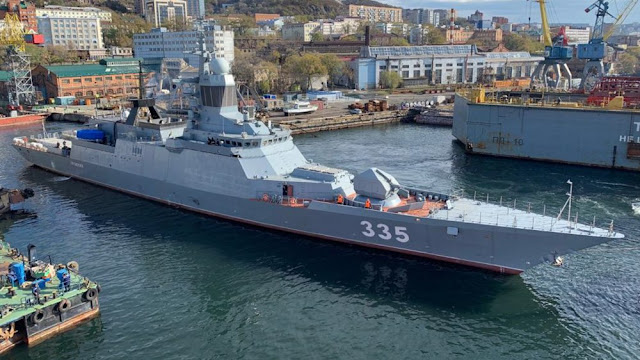 
The manufacturer of composite superstructures for Russian corvettes, the Sredne-Nevsky Shipbuilding Plant, improved logistics and reduced the cost of transporting products to the Far East. Starting from the Corvette Project 20380 " Loud ", the components of the superstructures are shipped from the Leningrad Region in standard 40-foot containers. This Mil.Press FlotProm reported in the press service of SNSP.

As representatives of the shipyard explained to the publication, it was possible to optimize the logistics by increasing the degree of detailing of the structures.

The decision was made jointly with the Amur Shipbuilding Plant, where the construction of the Pacific Corvettes of Projects 20380 and 20385

is underway. in which the Sredne-Nevsky Plant fully manufactures the material, sections and performs the bulk assembly of the superstructure blocks, then sending it to the body manufacturer, "the shipbuilders told the publication. At the same time, the Amur Plant independently fulfilled the superstructure saturation.

Now the finished shipboard composite construction is coming off the stand in St. Petersburg. After marking and presenting the Quality Control Department of both plants, as well as the military mission, the products are loaded into a 40-foot container, loosened and sent to the Far East.

At the same time, all procedures for the presentation and reception and transfer of products take place on the territory of the SNSS even before loading into the container. This allows the customer in Komsomolsk-on-Amur, after receiving the details, to immediately begin installation on the ship.

According to a naval source of the publication, the operating experience of the corvettes of the project 20380 of the Steregushchy type has revealed a number of problems, such as stagnant water on the decks, corrosion of superstructure fasteners, the formation of rust stains, as well as cracks and chips of putty. He added that the designer of the corvettes, the Central Design Bureau Almaz, and the factories - Severnaya Verf, SNSP and AIZ, had successfully eliminated the shortcomings. On serial corvettes used anti-corrosion coating, increased tightness of bolt fasteners, as well as the creation of stagnant zones of water on the deck.

Built at the Amur Shipbuilding Plant, the “Loud” at the end of August 2018 was taken to Vladivostok to the building base. He went to the factory running tests on December 29. It is planned that by the end of the year the corvette will be included in the Pacific Fleet.

The length of the corvette of the project 20380 is more than 100 meters, the displacement is 2220 tons. Sailing range - 4000 miles. Armament - Uran anti-ship missile system and Redut air defense system, torpedoes, heavy machine guns and grenade launchers. Aft is a helipad with a hangar for the base of the Ka-27 in the anti-submarine version.