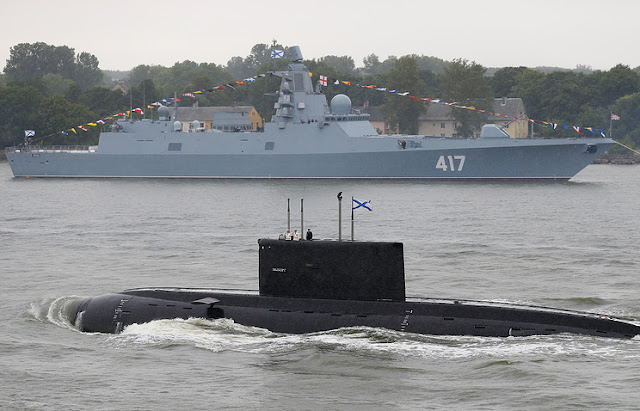 The Russian Navy and the United Shipbuilding Corporation are considering the possibility of ordering several more frigates of the project 22350 type "Admiral Gorshkov". Mil.Press FlotProm was informed about this by two high-level informed sources in the industry.

According to the first source, we are talking about the order of the "Northern Shipyard" of two more frigates. Relevant consultations with the ship's designer, the Northern PKB, are already underway.

Another source reported the desire of the Navy to get not two, but at least three or four ships of project 22350. The

interlocutors of Mil.Press FlotProm in the management of the United Shipbuilding Corporation and the Northern Shipyard, which is building the first series of frigates, did not confirm this information, but did not disprove . A source at USC said that the corporation was able to build both two and four ships.

In August 2018, the general director of Severnaya Verf, Igor Ponomarev, said in an exclusive interview with Mil.Press FlotProm that the company was able to simultaneously build eight frigates of the project 22350.

"As one of the designers of the Northern PKB told the publication, the fleet planned to order construction of eight, then only six such ships. However, the series was reduced to four units due to lack of funds. Now they want to continue it again."


Officially, information on the construction of an additional series of frigates was not confirmed by the publication. Corresponding requests were sent to the fleet and to the USC. According to the ex-commander-in-chief of the Russian Navy, Admiral Viktor Chirkov, the fleet needs at least 18 frigates of project 22350 and 36 corvettes of project 20380 (20385/20386).

The shipbuilding program until 2020 provided for the construction of eight frigates of project 22350. To date, only the lead ship of the Admiral Gorshkov series has been transferred to the fleet . The second frigate, the Admiral Kasatonov , is planned to be commissioned in the autumn of 2019. They want to complete the whole series by 2022.

The frigates of project 22350 will be replaced by a series of ships of project 22350M, which in the industry have been nicknamed “Super Gorshkovy”. According to the newspaper, as of November 15, 2018, the Northern PKB did not contract their design. The construction of the "M-series" was announced in 2014 by Viktor Chirkov, who served as commander-in-chief of the Navy from May 2012 to April 2016. The Russian fleet needs about 10 "Super-Gorshkovykh", which will take an intermediate position between the frigates of traditional displacement of 4,500-5,000 tons and promising destroyers. Project 22350M ships will receive a displacement of about 8,000 tons. The Northern Shipyard will be able to build them if it completes the modernization of production facilities on time.

Multi-purpose ships of the far sea zone (frigates) of the project 22350 were developed in the early 2000s in the Northern PKB. They were intended for mass construction (a series of at least 30 units).

In March 2017, the Deputy Minister of Defense Yuri Borisov said that it was the unreadiness of the Polyment-Redut system, for which the VKO Almaz-Antey concern was responsible,