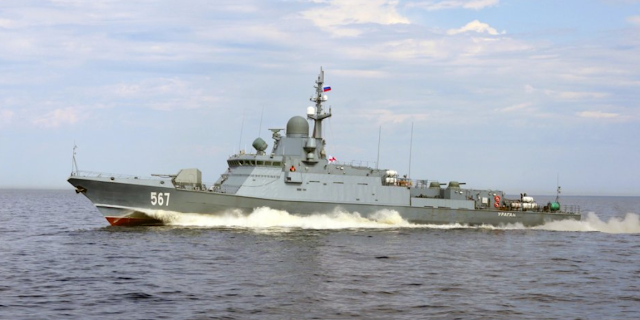 MRK "Uragan" of the project 22800, code "Karakurt" Press service of the plant "Pella"


"Hurricane", the head small rocket ship of the project 22800 (code "Karakurt"), built for the Russian Navy at the Leningrad shipyard "Pella", arrived in St. Petersburg after the completion of the state tests in northern latitudes. This was reported on Tuesday, November 6, by the press service of the Ministry of Defense of the Russian Federation.

Earlier, the ship successfully completed the stage of state trials in the White Sea, where it arrived on October 7 . According to the deputy head of the shipbuilding department of the Russian Navy, Captain I rank Mikhail Krasnopeyev, the Hurricane confirmed its characteristics, successfully fired off Caliber cruise missiles using coastal and naval targets, and used naval tests to develop speed more than 30 knots.

After completion of the last stage of the state testing program in the Baltic Sea, the small rocket ship "Uragan" will be transferred to the Russian Navy. According to the press service of the Ministry of Defense of the Russian Federation, this should happen before the end of 2018.

" Hurricane " - the lead small rocket ship of the project 22800 "Karakurt". It was laid at the Pella shipyard in Leningrad on December 24, 2015, and launched on July 29, 2017. The transfer of the ISCs to the fleet was planned in the same year, but it was not until May 2018 that the “Hurricane” began running trials on Ladoga.

Small rocket ships of the project 22800 "Karakurt" developed in the Central Marine Design Bureau "Almaz" as an alternative to the delay in the construction of frigates of the project 11356, caused by the disruption of supplies of Ukrainian gas turbine engines and the lack of Russian serial analogues at that time. It is planned to supply the Russian Navy with 18 ships of this type.

The problems with the engines provoked the transfer of the supply of the Karakurt naval fleet.