GRSE Lays Keel of First of Three Type 17A Frigates 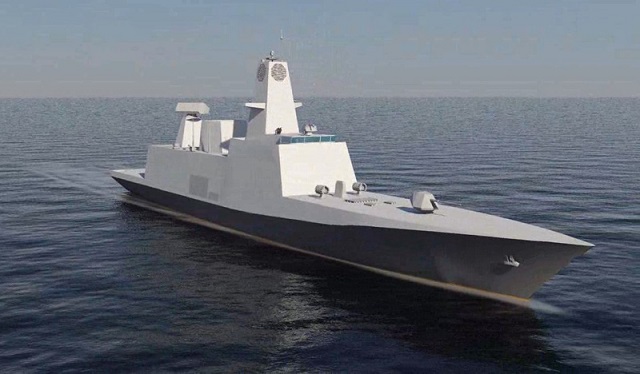 November 10, 2018 – Kolkata based Garden Reach Shipbuilders and Engineers Limited (GRSE) touched a key milestone in its Project 17A today (10th November 2018) with the laying of the keel of the first of three Advanced Stealth Frigates. The keel was laid at GRSE’s Main Works Unit in the august presence of Vice Admiral K. B. Singh, PVSM, AVSM, Flag Officer Commanding-in-Chief, Eastern Naval Command. Rear Admiral V. K. Saxena (Ret’), Chairman & Managing Director and other senior officials of the Indian Navy and GRSE graced the ceremony.

The contract for construction of three highly Advanced Stealth Frigates under Project 17A is the largest ever order won by the company. This prestigious contract of Rs. 19293.46 crore was signed between the Ministry of Defence and GRSE on 20th February 2015. The first ship is expected to be delivered in 2023 and the next two ships in 2024 and 2025 respectively.

Since its takeover by the Government of India in 1960, GRSE has delivered 98 warships – the highest number of warships deliveries made by any Indian shipyard till date. The Shipyard has a strong inhouse design team of close to 100 designers. GRSE has built high-end platforms in the past, including Frigates, Missile Corvettes, new generation Anti-Submarine Warfare Corvettes and Landing Craft Utility Ships for Indian Navy. It has the distinction of achieving over 90% indigenous content, on board ASW Corvettes and LCUs, a major step towards self-reliance in state-of-the-art warship design and construction.

Having modernized its infrastructure facilities, GRSE is today in a position to construct large number of warships using Advanced Modular Integrated Shipbuilding Technology in line with the best in the world. This has helped enhance its capacity to the present level of constructing 20 warships concurrently.

P17A Frigates are state-of-the-art Guided Missile Frigates. Each of these ships will be 149 m long, with displacement of approximately 6670 T and a speed of 28 knots. P17A Stealth Frigates are being built deploying the latest Integrated Construction Methodology with enhanced pre-outfitting to enhance quality and reduce build periods considerably. GRSE has appointed M/s Fincantieri, Italy as the Knowhow Provider for Technology Upgrade and Capability Enhancement.

GRSE has set sail towards a growth route in line with its vision to be a world class shipyard. The award of prestigious Project 17 A is a major leap for the shipyard in this regard. Continuing Research & Innovation, excellent product quality, world class modern infrastructure, and a strong corporate structure coupled with a competent & experienced human capital including around 100 in-house design engineers, promise a bright future for GRSE. 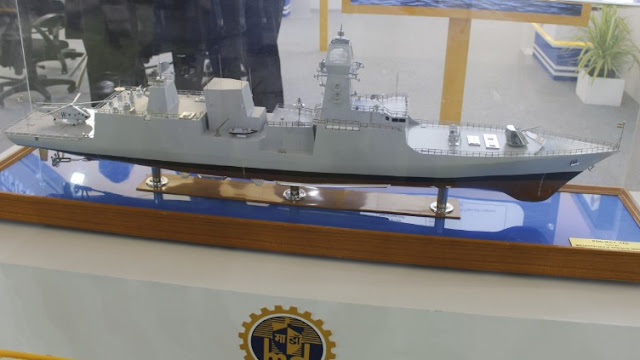 The ship will be armed with launchers for the Indo-Israeli Barak-8 or Long Range Surface-to-Air Missile (LR-SAM) missile system, two of which are mounted forward while another two are installed with two clusters mounted forward and two mounted abaft the funnel, and one eight-cell BrahMos missile launcher unit located forward.

Anti-submarine weapons comprise a pair of rocket launchers that are an indigenous modification of the RBU 6000, and a pair of triple-tube torpedo launchers.

Armament includes a 76 mm Oto Melara gun and a pair of AK-630M close-in weapon systems sited at aft above the hangar. The ships will be equipped with two anti-torpedo decoy systems, and what appear to be four decoy launchers.

Sensors include the Elta MF-STAR radar for the LR-SAM housed in an enclosed mast, a number of unspecified navigation radars, and a bow-mounted sonar. Source: www.janes.com 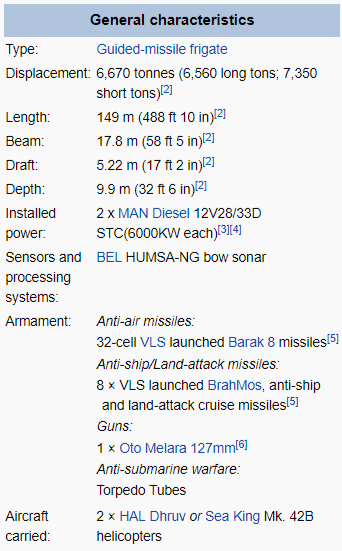