Could Russia Design a Fifth-Generation Variant of the Su-35 for India? 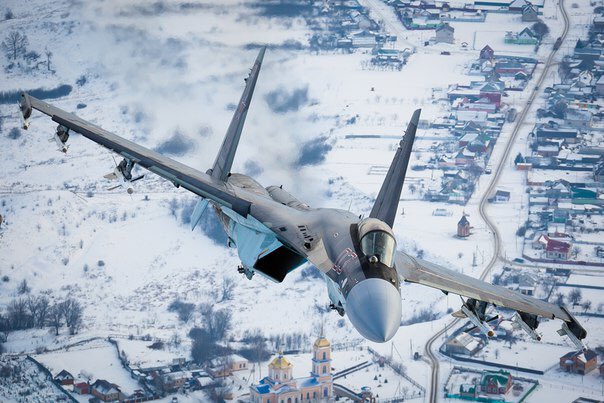 
A stealth-capable Su-35 could be just what India needs to keep pace with China and Pakistan.

At Abu Dhabi’s IDEX show, the CEO of Russia’s Rostec, Sergey Chemezov, stated, “We have been negotiating and have signed the intention protocol for the Su-35. Now we are working on designing ideas for this contract and on creating a manufacturing platform for an aircraft of the fifth generation.”

The size of India’s intended order remains uncertain, but could well be over 100 platforms, considering the size of previous orders and the planned size of orders for the FGFA fighter.

This would hardly be the first time that such a modification had been attempted. With the United States unwilling to export its F-22 Raptor fifth generation platform, Boeing has extensively modified the airframe of its F-15E strike fighter to develop the F-15SE Silent Eagle — a variant of the fighter with a reduced frontal radar cross section and radar absorbing paints. While the F-15E lacks the upgraded avionics, advanced missiles, and supermaneuverability of the Su-35, and cannot be considered “fifth generation” even with stealth capabilities, its stealth variant allows U.S. allies to field low observable heavy fighters — something sorely needed in light of their inability to acquire the F-22 Raptor. Saudi Arabia, currently fielding over 150 F-15 and F-15E fighters, has notably expressed a strong interest in acquiring the platform. The modifications proposed for the Su-35 are likely to be in many ways analogous to those applied to the F-15E to create the F-15SE.

With Russia’s willingness to export the Su-57 as yet unknown, and with several potential clients seeking air superiority fighters with stealth capabilities, a modified Su-35 variant potentially based on a similar concept to the F-15SE could well prove a less costly and highly demanded product. The United Arab Emirates in 2017 entered cooperation with Russia to develop a fifth-generation fighter, and has also shown interest in acquiring large numbers of the Su-35. A stealth variant of the fighter, which would fulfill the criteria of a fifth-generation platform despite being less capable that the Su-57, could well be ideal for the Arab state as well as for India.

In Indian hands the platform could provide the country with the critical advantage it seeks over China’s advanced J-11B and Su-30 air superiority fighters. With Pakistan developing its own light stealth fighter, New Delhi’s need to acquire stealth technology appears greater than ever. The upgraded Su-35 variant is set to cost significantly more than the standard fighter, and come with far higher maintenance requirements. Should it be modified to deploy Russia’s latest missile platforms, such as the K-77 missiles developed for the Su-57 or the 400-kilometer range R-37 interceptor missiles, the stealth variant of the Su-35 designed for India could be a truly lethal, cost-effective alternative to the HAL FGFA.

Abraham Ait is a military analyst specializing in Asia-Pacific security and the role of air power in modern warfare. He is chief editor of Military Watch Magazine.