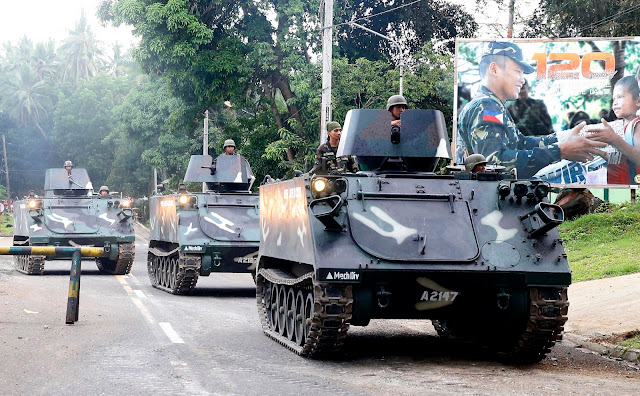 By Clarissa Batino  and Andreo Calonzo

“Do not buy anymore from Canada or from the United States because there is always a condition attached,” Duterte told reporters in Davao City on Friday. He announced the cancellation of the chopper deal with Canada in a subsequent speech. The Canadian government denied the deal had been scrapped.

Canada ordered a review of the agreement a day after it was signed on concern that the aircraft would be used against Filipino rebels, which Duterte didn’t deny. “We will really use these weapons invariably against the rebels and terrorists,” he said Friday, according to a transcript provided by his office. During a forum organized by the Manila Times also in Davao, Duterte said: “We will stop buying. Anything that is arms, do not; Canada is out.”

Since taking office in June 2016, the 72-year-old leader has launched a crackdown on drugs that killed thousands, prompting an investigation by the International Criminal Court for alleged human rights violations. Months into his term, the U.S. halted a planned sale of 26,000 assault rifles to Philippine police on concern over the killings. Duterte responded by scrapping the weapons deal.

The brash, tough-talking leader who enjoys strong support at home, threatened to withdraw from a treaty that helped form the International Criminal Court, while daring it to execute him if he’s found guilty of crimes against humanity. Duterte vowed to eliminate illegal drugs, corruption and bureaucratic red tape when he became president.

“Find me guilty, of course, you can do that. I don’t want imprisonment,” he told the briefing. “I beg of you to find a country where they execute.”

This is not Duterte’s first spat with Canada. In November, he lashed out at visiting Canadian Prime Minister Justin Trudeau and European officials over their criticism of alleged human rights abuses under the country’s drug war.

“I will never, never allow a foreigner to question why it is so -- it is an insult,” he told reporters in an expletive-laden response to questions about Trudeau’s decision to bring up thousands of extra-judicial killings. Trudeau was among a handful of world leaders who criticized the drugs crackdown while in Manila last year to attend meetings of the Association of Southeast Asian Nations.

Duterte also on Friday threatened to close the resort island of Boracay in the central Philippines, a tourist attraction known for its powdery white sand, if environmental degradation isn’t addressed. He also reiterated he will halt open-pit mining operations.

— With assistance by Sarah Jacob, and Josh Wingrove

Canada did the same to Thailand but still sold weapons to Saudi Arabia the double standard is evident.