Lockheed, Rheinmetall team up to bid for German helicopter order 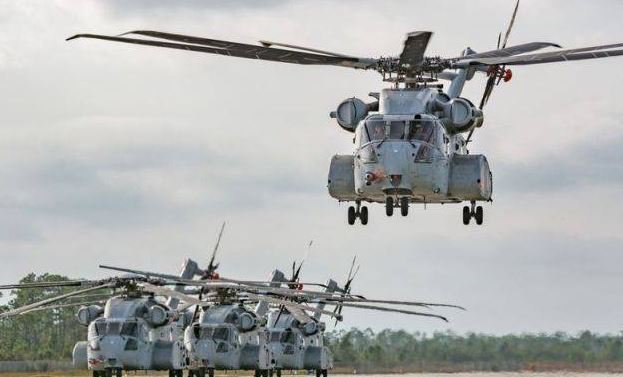 BERLIN (Reuters) - U.S. arms manufacturer Lockheed Martin Corp (LMT.N) and German peer Rheinmetall AG (RHMG.DE) said they will team up to compete for a contract valued at around 4 billion euros ($4.9 billion) to supply the German military with heavy-lift helicopters.

The two companies told Reuters they had signed a strategic agreement on the tie-up, which they are set to formally announce on Tuesday.

Germany in December approved plans to buy 45 to 60 new heavy-lift helicopters, kicking off a competition between Lockheed, which is offering its massive CH-53K helicopter, and Boeing Co (BA.N), which will offer its smaller twin-rotor CH-47.

The German defense ministry expects to issue a request for information in the second half of 2018, with a contract expected to be awarded in mid-2020 and deliveries to begin in 2023, replacing Germany’s existing fleet of CH-53G aircraft.

Lockheed said in an emailed statement to Reuters that it had chosen Rheinmetall as its “lead teammate” for the bid because of the German company’s “wealth of experience and knowledge.”

It said it would name other German partners in coming weeks.

“The goal is to offer German military forces as a comprehensive solution that includes the CH-53K helicopters as well as additional services in maintenance, service, training and program support,” Rheinmetall said in an emailed statement to Reuters.

Dan Schultz, president of Lockheed’s Sikorsky helicopter unit, who flew earlier CH-53 model helicopters while serving in the U.S. Marine Corps, said in Lockheed’s statement that the new CH-53K model was “the most powerful heavy-lift helicopter that we have ever built.”

Boeing plans to offer Germany the CH-47 Chinook already used by eight other NATO countries. It said it already worked with 100 companies in Germany, and a future contract for the Chinook would create additional work for its supply base.

“We are developing additional partnerships with German industry for the (heavy-lift helicopter) competition and will announce those at the appropriate time,” said Boeing spokeswoman Marcia Costley.

Lockheed’s CH-53K, which includes an on-board diagnostic system, is due to make its international debut at the Berlin air show in April.

The U.S. Marine Corps plans to buy 200 of the new CH-53K helicopters at an average price of around $88 million per plane and expects to declare it ready for combat use in 2019.

Germany hopes to start buying its helicopters in 2023, and Israel and Japan have also expressed interest in the CH-53K.

Experts say the Boeing Chinook could cost Germany less to buy, but it will require upgrades in coming years that could add costs. It also carries less, so it would take more flights to accomplish the same mission as a CH-53K.