Airbus Helicopters could offer armed H145M to US Army 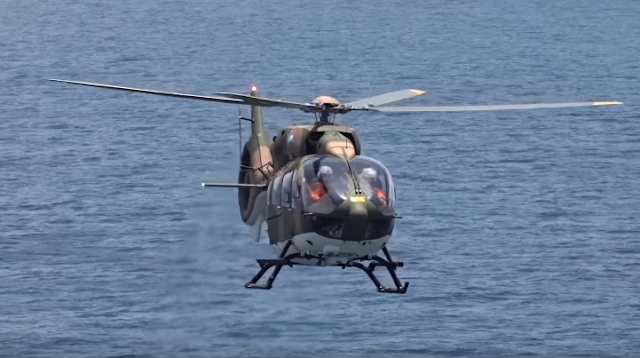 SINGAPORE: Airbus Helicopters could offer armed H145M to US Army

Airbus Helicopters believes it may be possible to sell an armed variant of the H145M to the US Army – almost five years after the service cancelled its armed aerial scout (AAS) programme.

Christian Fanchini, head of operational marketing at the French manufacturer, speaking at a Singapore air show media briefing, said that it could offer a replacement for the army's now-retired fleet of Bell Helicopter OH-58 Kiowa Warriors.

In 2013, the army shelved its AAS procurement, instead moving heavier and more complex Boeing AH-64 Apaches into the role, to operate alongside unmanned aerial vehicles.

The US Army already has experience Airbus Helicopters' products, with the UH-72 Lakota, based on the earlier commercial EC145, used for training and utility missions.

Fanchini says any offer would not be an armed UH-72, however. "It would be the H145M, not the Lakota," he says, as the latter's engines "are not powerful enough to support a full weapons load".

A military variant, the H145M, has so far secured 29 orders from three customers: Germany (15), Serbia (nine) and Thailand (five).

Airbus Helicopters assembles the Lakota at a production facility in Columbus, Mississippi, and, says Fanchini, a future armed scout could also be produced at the site. "If the USA decided to acquire the H145M, for sure, we have an assembly line there and it makes sense to continue the story we have begun with the Lakota."

It is unclear if the US Army wants a new acquisition process, or more crucially has the budget to launch one, but as recently as 2017 stated that it still required an armed scout helicopter.

The manufacturer is developing its HForce modular weapons system for integration with "any aircraft coming from our commercial range", with initial ballistic armaments to be qualified on the H145M in 2018.

Guided munitions, including the Lockheed Martin AGM-114 and Rafael Spike anti-tank missiles, will follow in 2019.

Serbia is the launch customer for the modification, but Fanchini says it has secured an additional Eastern European customer for HForce on the H145M.