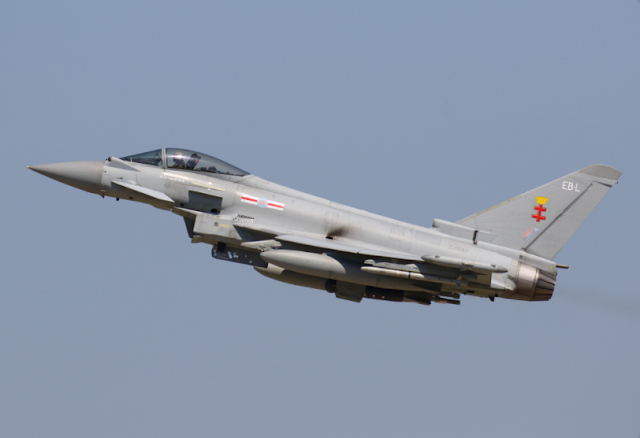 LONDON — Britain has pitched a range of strategic and industrial tie-ups to the Belgian government as part of a bid to secure a deal to supply Eurofighter Typhoon jets to replace the country’s aging F-16 fleet.

“The proposal includes 34 Typhoon aircraft, underpinned by the offer of a deep strategic, defence and industrial partnership between the Governments of Belgium and the U.K.,” the British Ministry of Defence said in a statement.

Feb. 14 was the deadline date for the submission of best and final bids for the Belgian air combat capability program. A decision on the winning contractor is expected later this year with the fleet being delivered starting 2023.

British Defence Secretary Gavin Williamson, in Brussels for a two-day NATO defense ministers meeting, said the jets offer Belgium a “formidable capability which forms the backbone of European air power, as well as a comprehensive long-term defense and industrial partnership with the U.K. A unique partnership with the RAF and integration with our world-leading support service mean Belgium’s selection of the Typhoon would be a powerful demonstration of us working together to support security across the continent.”

The U.S. State Department said last month it had approved a possible foreign military sale of 34 Lockheed Martin F-35 jets to the Belgians in a deal which could be worth up to $6.5 billion.

Earlier this month the U.S. confirmed it had responded to the request for final offers.

“The F-35 Joint Program Office invested considerable effort to craft an offer that enables our Belgian allies to acquire the F-35’s unmatched capabilities well within the budget specified by the [Belgian] Strategic Vision for Defense 2030,” said the U.S. government.

Lockheed Martin and engine maker Pratt & Whitney both have memoranda of agreement with a number of Belgian companies.

It may not be a two-horse race though. The French government and Dassault are also somewhere in the mix. They declined to formally respond to requests for proposals, claiming they had more to offer than bid requirements which, they said, were too restrictive.

Instead the French have been offering Belgium what has been described as a deep and structured economic and military partnership.

Dassault Aviation chairman and CEO Eric Trappier on Feb. 13 signed 13 cooperation agreements with Belgian companies as part of an offer of the Rafale in a proposed government-to-government deal. That signing is “part of the proposal of the Franco-Belgian strategic partnership concerning the jet fighter,” Dassault said in a statement.

The French proposal of the Rafale falls outside the Belgian tender, as Paris seeks to build a broad bilateral relationship aimed mainly to counter an offer of the F-35 Joint Strike Fighter.Those cooperation agreements bring to more than 30 contracts signed with Belgian partners for activities including service for the Rafale, training of aeronautical engineers and work on drone projects, the company said. Other areas include automating production lines, simulation, research on advanced material and predictive maintenance.

Among the local partners were Sabca, Safran Aero Booster and Thales Belgium. The former is the Belgian unit of Dassault Aviation.Following an order, Dassault, Safran and Thales are committed to investing in Belgium at least €20 billion over 20 years, and supporting more than 5,000 high technology jobs, the aircraft builder said. Dozens more agreements with local partners would be signed as part of a campaign by French companies to invest in the Belgian economy, Trappier said.

The status of the French bid is unclear at this point.

The French decision was not the first left field move by expected bidders. Boeing pulled the F/A 18 E/F Super Hornet from the contest last April citing issues with the fairness of the bidding process.

Not long after that Saab unexpectedly withdrew the Gripen E saying they could not meet Belgian operational support requirements without a change of Swedish Government foreign policy.

For their part the British are, on the military front, offering to further strengthen co-operation between the two air force, integrate the Belgians into Royal Air Force support arrangements and form a training partnership which involves training and exercising together.

The British are also offering to help establish a National Network Cyber Centre, a Cyber Innovation Centre and a Cyber Research Partnership, underpinned by a partnership between the two governments.

U.K. Typhoon lead contractor BAE Systems and others, have been signing industrial co-operation deals with Belgian industry. As of Feb. 7 BAE said it had signed agreements with more than 20 Belgian companies to explore potential collaboration opportunities as part of a wide-ranging Eurofighter industrial proposal.

Despite the efforts by the Europeans to entice the Belgians with attractive strategic and industrial offers Doug Barrie, the senior air analyst at the International Institute of Strategic Studies reckons the F-35 remains the aircraft to beat.

“My money is on the F-35, particularly if the Belgians insist on retaining the ability to deploy B-61 freefall nuclear weapons to match the capability they have on the F-16,” said Barrie. “The F-35 is the only aircraft in the competition presently able to do that. Rafale is wired to deploy nuclear free fall weapons but they are French.”

Pierre Tran in Paris contributed to this story.