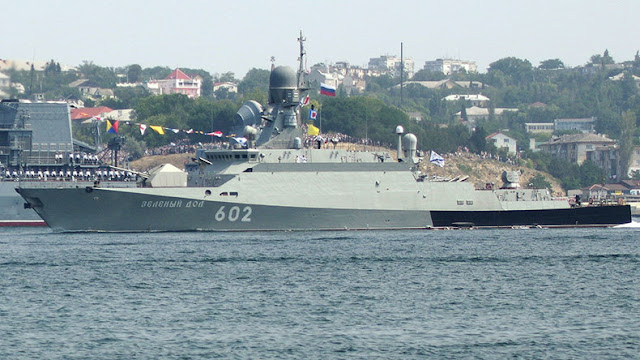 
KAZAN, February 23 (Itar-Tass) - RIA Novosti. The Russian Navy will be replenished by a small rocket ship Vyshniy Volochek, built at the Zelenodolsk plant named after A.M. Gorky in Tatarstan, in March, said on Friday the head of the department of the Ministry of Defense of the Russian Federation to ensure state defense order Pavel Pechkovsky.

On Friday, the eleventh small missile ship of project 21631 was laid on the slabs of the Zelenodolsk plant (Zelenodolsk design-and-design bureau JSC) "Naro-Fominsk" was developed. Currently, the five ships of this project - the main "Grad Sviyazhsk" and the serial "Uglich", "Great Ustyug", "Green Dol" and "Serpukhov" - already serve in the Russian Navy. At the various stages of construction and testing are five more ships of the project - Vyshny Volochek, Orekhovo-Zuevo, Ingushetia, Graivoron and Grad.

"He (the Vyshny Volochok MRC) was due to be delivered last year, but in connection with the implementation of measures for import substitution, we expect it to be received, I think that in March the Navy will be supplemented with another combat unit," said Pechkovsky journalists.

He noted that due to the implementation of the import substitution program at present all types of basic equipment on the ships of the Navy are of domestic production.
Earlier, the Ministry of Defense of the Russian Federation reported that the small missile ship of the Black Sea Fleet "Vyshniy Volochek" is completing factory running and state tests. It was planned that he would be admitted to the Navy before the end of 2017, after the completion of all stages of the tests.

The small missile ships of Project 21631 are multi-purpose ships of the "river-sea" class equipped with the most modern examples of artillery, missile, anti-sabotage, anti-aircraft and radio-technical weapons. Appointment of the ships of this project is the protection and protection of the economic zone of the state. In particular, they have an increased displacement and are equipped with the newest high-precision long-range missiles - the universal missile system Caliber-NK, designed to defeat sea and coastal targets.