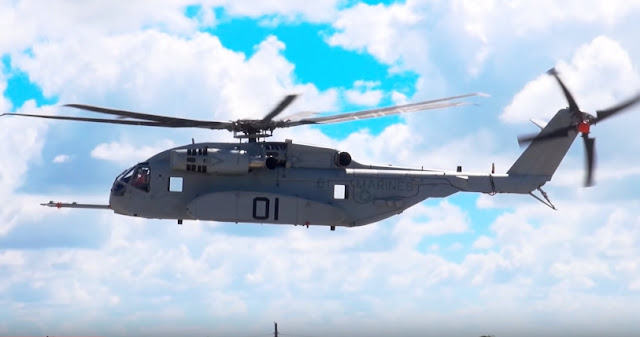 
CH-53K delivers the lowest risk, best value platform that will exceed the customer's operational requirements for the next 50 years

The Sikorsky CH-53K team will host the German companies in an industry chalet during ILA Berlin Airshow April 25-29. Sikorsky will showcase plans for the long-term sustainment of the CH-53K by German aerospace industry. The plans will optimize maintenance and repair for the German Air Force for future decades.

"The CH-53K is the most modern and capable heavy lift helicopter ever built and has the ability to fly for the next 50 years performing ever expanding combat, humanitarian assistance and disaster relief missions," said Dan Schultz, president of Sikorsky. "We look forward to our partnership with German industry to bring true heavy lift capability to every aspect of the German Armed Forces."

The CH-53K helicopter is the best choice for handling missions like humanitarian aid, troop transport, casualty evacuation, support of special operations forces, and combat search and rescue. No matter the mission, the aircraft provides the highest degree of safety for its crew and occupants in all conditions.

With the legacy fleet of the CH-53G, Sikorsky has a strong relationship with the Bundeswehr. The CH-53K will enable the German Armed Forces to conduct bona fide heavy lift operations. Intelligent, reliable, low-maintenance and survivable, the CH-53K is the future of German Heavy Lift.

Sikorsky, with its lead exclusive teammate for in-service support, Rheinmetall, continues to identify additional German defense companies to contribute to the sustainment of the helicopter in Germany.

The CH-53K King Stallion advances Sikorsky's 50 years of manufacturing and operational success with its CH-53A, CH-53D/G, and CH-53E predecessors. Built to thrive on the twenty-first century battlefield, including shipboard operations, the CH-53K aircraft is an all-new aircraft, using modern intelligent design. The rugged CH-53K is designed to ensure reliability, low-maintenance, high availability and enhanced survivability in the most austere and remote forward operating bases.

The CH-53K is a production platform; it will be fielded to the U.S. Marine Corps (USMC) as a fully-operational aircraft in 2019.  By the time Germany receives its first aircraft, the CH-53K will have been in service with the USMC for five years.  The CH-53K is the modern heavy lift solution that will provide the German Armed Forces with a proven heavy lift helicopter that can be entered into service seamlessly without need for upgrades for the next several decades.

About Lockheed Martin
Headquartered in Bethesda, Maryland, Lockheed Martin is a global security and aerospace company that employs approximately 100,000 people worldwide and is principally engaged in the research, design, development, manufacture, integration and sustainment of advanced technology systems, products and services.

For additional information about CH-53K, visit: