A-10 in Jeopardy Again? Air Force May Not Keep All Warthogs Until 2030 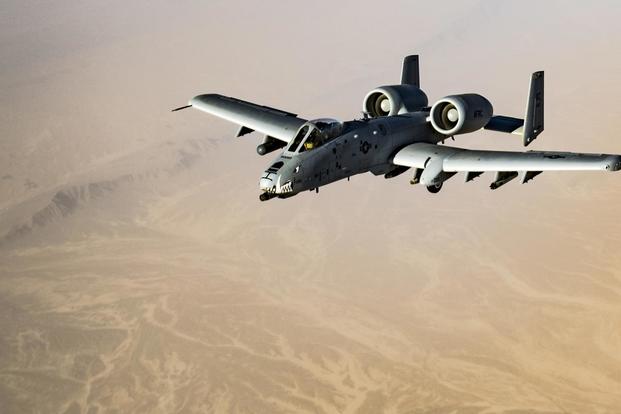 A U.S. Air Force A-10 Thunderbolt II pilot maneuvers into formation while waiting for his wingman to conduct refueling operations with a KC-135 Stratotanker over Afghanistan in support of Operation Freedom's Sentinel, March 12, 2018. (U.S. Air Force/Tech. Sgt. Gregory Brook)


The Air Force may be backtracking from its stated plan to keep the A-10 Thunderbolt II flying until 2030.

During a House Armed Services Tactical Air and Land subcommittee hearing on Thursday, Lt. Gen. Jerry D. Harris, the service's deputy chief of staff for strategic plans and requirements, said as a platform, the A-10, beloved among ground troops and attack pilots alike, will remain until roughly that time period.

But even as the "Warthog" got funding for brand-new wings in the $1.3 trillion omnibus budget, that doesn't necessarily mean every one of them will be flying until 2030, Harris said.

"We will have to get back to you on the groundings per year, per airplanes," Harris said in response to Rep. Martha McSally, a Republican from Arizona and former Air Force A-10 pilot....Read rest of article: HERE

US Defense News
Published on Apr 10, 2018
Why the A-10 Warthog Might Be America's Best Weapon of War?


Related articles:
U.S. Air Force gets budget for new wings for the A-10 Warthog
A-10 Warthogs to get new wings
USAF Official in Charge of A-10s Says Re-Wing Program Is "Not Going to Happen"
Afghan officials request return of US A-10s to Afghanistan
A-10C pending funding from Congress for new wings