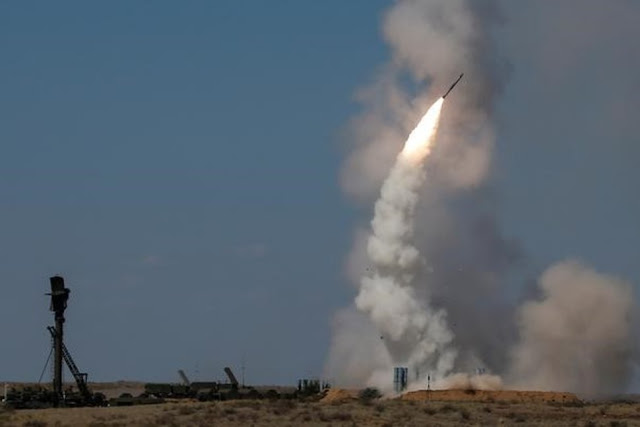 An S-300 air defense missile system launches a missile during the Keys to the Sky competition at the International Army Games 2017 at the Ashuluk shooting range outside Astrakhan, Russia August 5, 2017. REUTERS/Maxim Shemetov

The statement, made by the Russian Defense Ministry, that Moscow might reconsider a sale of the S-300 systems to Damascus following the US and allied airstrike, has raised concern among Israeli analysts and journalists, who are concerned over possible threats it may pose to the Jewish state.

The Jerusalem Post has warned that “Israel’s air superiority is at risk of being challenged in one of the most difficult” areas if Russia decides to sell Syria more advanced air defense systems. The newspaper has voiced fears that the Israeli pilots might get killed if Damascus had its hands on more effective missiles.  The unit in question is the S-300, a Russian long range surface-to-air missile system, developed to defend against aircraft and cruise missiles. The system is one the most advanced weapons in its class.

Analyst from I24 news broadcaster Ron Ben-Yishai backs these concerns, saying that the Jewish state would have to take “cautionary and preventive measures not yet taken so far.”

Chief of the Main Operational Directorate of the Russian General Staff Col. Gen. Sergey Rudskoy said that Russia might consider selling the S-300 systems to Damascus shortly after US-led strikes on April 14.

Moscow had already decided against selling them to Damascus, Syria some time ago due to “the pressing request of some of our Western partners.” But as the General stated, taking the latest events into the account, Russia can consider the question not only for Syria, but for other states.

According to the media, the more up-to-date S-300 systems could be a needed upgrade for Syrian air defense, which now consists of Soviet-era weapons. According to the JP, the most advanced Russian system Damascus possesses is a short range set Pantsir S-1, able to shoot down drones and missiles in Syrian airspace.

Since 2013, Israel has confirmed hitting about 100 targets in Syria, while many more strikes have also been reported to have been launched by the Jewish state forces, who later denied it. Some targets were in the Syrian-Israeli border area in the Golan Heights. Two-thirds of the region, internationally recognized as Syrian territory, was annexed by Israel in the 80s and remains disputed. The eastern Golan Heights, which are in Syrian hands, has become the target of the al-Qaeda-affiliated al-Nusra Front, as well as Daesh* militants and other Syrian opposition forces.

However, Israel has targeted locations and alleged Hezbollah weapons convoys in the capital province and other regions. In 2017 Israel bombed a military airport near Damacus. A Syrian official then told Sputnik that it was done "to encourage and support terrorists".  On February 10, 2018, in retaliation for an alleged Iranian drone incursion over Israeli territory, the IDF launched an airstrike against its positions on Syria's territory, costing them one of their jets. The loss of an aircraft over Syrian territory prompted another attack against the country, claiming lives of between 6 and 10 soldiers, according to various sources, and damaging 12 sites.

Russian Missiles for another Israeli Rival

In 2016, Russia delivered a S-300 to another Israeli rival power in the Middle East and an ally to the Syrian government, Iran. The $800-million Moscow-Tehran deal to deliver Russian-made S-300 air defense systems to Iran was initially signed in 2007; however, it had been suspended due to the adoption of UN Security Council sanctions on Iran in mid-2010. In April 2015, Russia resumed the talks on the S-300 deliveries following an interim agreement on the Iranian nuclear program.

In 2016, the Russian special presidential envoy to Afghanistan said Tehran also showed interest in deliveries of Russian S-400 air defense systems, but the two countries were not currently holding any negotiations on the topic. The S-400 is Russia's next-generation air defense system. It carries three different types of missiles capable of destroying aerial targets at a short-to-extremely-long range.

"With Russia considering supplying the S-300 surface-to- air missile systems to Syria, Israel’s air superiority is at risk of being challenged in one of its most difficult arenas.

With a de-confliction mechanism in place with Russia over Syria in order to avoid any unwanted conflict with the superpower, Israel has largely had free reign over Syrian skies to carry out strikes on targets deemed a threat to the Jewish state."  Quote from Jerusalem Post